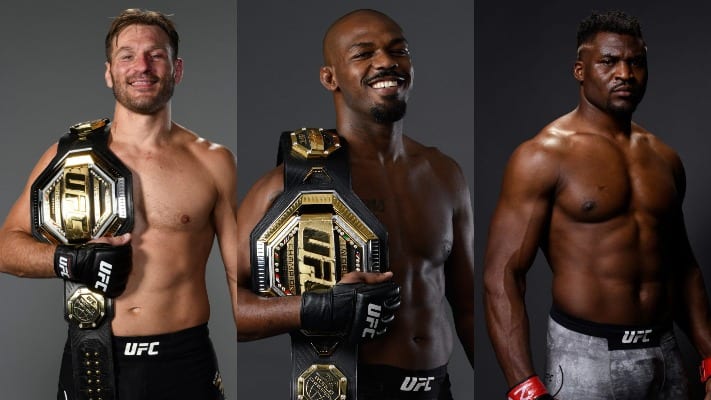 UFC President Dana White revealed that Jon Jones will be in line to fight the winner of the UFC 260 main event Stipe Miocic vs Francis Nganou 2 in March.

Speaking to Sportsnet, White confirmed that the former Light Heavyweight champion will be making the move and get an immediate title shot.

Jon Jones has been teasing a move to Heavyweight for years now, but now the 33 year old seems intent on making the move and even showed off his new physique in social media posts. The former Light Heavyweight king officially vacated his belt in August to focus on his Heavyweight career.

White said “Heavyweight. Jon Jones is going to move to heavyweight. We’re going to have Stipe vs. Francis, and the winner of that will probably fight Jon Jones.”

When asked as to why Jones is finally making the move, White stated “The guy’s been the king of the light heavyweight division forever. I think he thinks it’s time to move up to heavyweight. He knows his body, he knows his abilities, he knows better than anybody else does. But it’s impressive. Let me tell you, who wants to fight Francis Ngannou? The answer is nobody, okay? Nobody wants to fight that guy. But Jon Jones does. Pretty impressive.”

“Me and Jon Jones have been (butting heads) for 10 years,” White said. “We had probably the best conversation we’ve ever had since we’ve known each other around the holidays. And to me, he seems like he’s in the right place. He’s doing all the right things right now, he’s saying all the right things. If everything plays out for us the way that it’s looking, in our 2021 we’re going to see a lot of Jon Jones, a lot of Conor, and maybe some Khabib.” (Transcribed by BJPENN.com)

Jones last appeared in the octagon at UFC 247 where he defended his title by beating Dominick Reyes via unanimous decision, in what some people considered to be controversial.

Do you want to see Dana White match Jon Jones against Miocic or Ngannou?