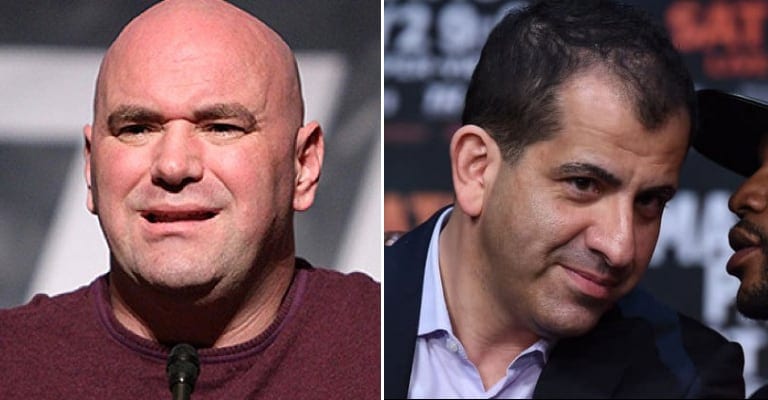 In an otherwise down year for mixed martial arts, UFC president Dana White has gone on record saying that 2017 was the UFC’s “best year ever,” presumably based on the massive financial haul generated by last August’s Floyd Mayweather vs. Conor McGregor boxing match.

The fight was buoyed by a circus-type buildup and gained 4.3 million pay-per-view buys in North America, numbers that have been largely verified and were reported by the UFC’s co-promoter, Showtime Sports, in a previous press release. The figures had the fight as the second-biggest draw in the history of North American PPV, with only May 2015’s Mayweather vs. Pacquiao match outselling it with 4.6 million buys.

But apparently White is far from pleased with how the TV giant dealt with the numbers apparently, telling Yahoo’s Kevin Iole in a recent in-depth interview that no matter what Showtime releases, Mayweather vs. McGregor was the biggest fight ever:

“Think about this and I don’t give a shit about Showtime’s fucking full of shit press release they put out — it’s the biggest fight ever. Ever in combat sports history.”

He continued on to cite his own figures, insisting that Mayweather vs. McGregor did 6.7 million buys worldwide, and would have done up to 7 million if the streaming service had not crashed right before the fight started. With Showtime reporting lower numbers only focusing on North America, White was so mad he said he would never trust Showtime and vowed to never do business with them again:

“The thing did over 6.7 million buys and if the service didn’t drop, we would have gotten closer to 7 million,” White continued. “The way that they handled that press release and what they did — I didn’t trust them before and now I despise those fucking guys. The Showtime guys, I’ll never work with them again. Ever.”

White may have his numbers a bit mixed up, however, as he seems to be comparing the worldwide buys with Showtime’s North American figures and focusing on the discrepancy between the two numbers, which would obviously create a massive gap as one encompasses the whole world.

Showtime Sports executive Stephen Espinoza seemed to realize that, releasing a tweet earlier today clarifying that the company had released accurate North American figures that had been vetted by involved parties before being released:

Sounds like he's upset because we committed the cardinal sin of telling the truth (when we released the accurate total for N. American PPV buys on MayMac).

Strange that telling the truth, in a press release vetted by all parties in advance, is something to be "despised" for. https://t.co/rFxKXz0Bjz

When examined in that light, it seems like White was looking for some inflated numbers to tout publicly as UFC owners Endeavor look to pay back the loans outstanding on their July 2016 purchase of the MMA leader, which is currently floundering without any true stars outside of McGregor, whom they let compete in a boxing ring for his only fight of 2017.

Reports dictate Showtime is to be believed on the numbers, and White vowing to never do business with them again may seem like sour grapes from a man looking for overblown figures that just weren’t quite there.

And let’s be honest, if McGregor wanted to rematch Mayweather in boxing or ‘Money’ ever wanted to fight in the Octagon for some reason, White would probably find a reason to open talks back up with Showtime despite this perceived – and perhaps superficial – slight.