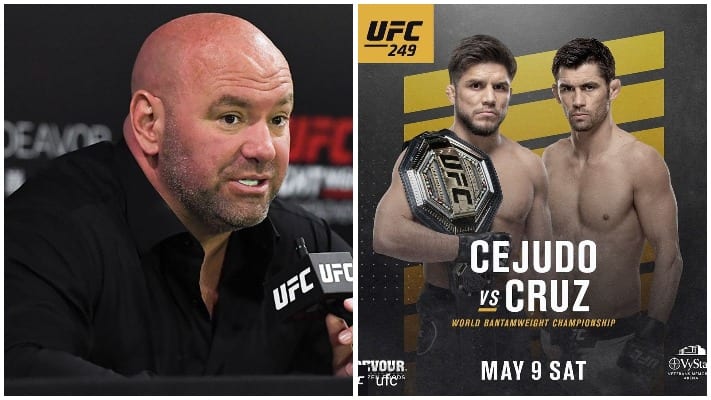 Cejudo puts his bantamweight belt on the line against former champion Cruz at UFC 249 this weekend.

‘The Dominator’ hasn’t fought since losing his 135lb title to Cody Gardbrandt almost four years ago. A plethora of injuries has hindered the career of Cruz who has similarly long layoffs but always managed to return to the top of the sport.

Speaking to BT Sport White appeared doubtful Cruz would be able to do it again. The UFC boss would consider Cruz beating Cejudo this Saturday night the biggest upset of all time, he said.

“100 percent. I think it’s the biggest upset ever (if it happens). Say what you want about Henry Cejudo, (if) you don’t like his personality, the guy is unbelievable and he’s looked incredible in his last several outings. He is the man right now (in) two different weight classes,” White said.

“Dominick Cruz is the unluckiest fighter of all time. I mean the injuries that this guy’s had. If he can pull this off, it’s one of the biggest upsets. I’d put it right up there with Matt Serra vs. Georges St-Pierre.”

Cejudo has been super active in recent years and has established himself as one of the best pound-for-pound fighters on the planet. The Olympic gold medallist holds high profiles wins over Demetrious ‘Mighty Mouse’ Johnson, TJ Dillashaw and Marlon Moraes. He appears to be hitting his athletic peak and would be a stiff test for Cruz even on his best day. It’ll be interesting to see how the UFC 249 co-main event plays out this weekend.

Do you agree with Dana White? If Dominick Cruz beats Henry Cejudo at UFC 249 will you consider it the biggest upset of all time?