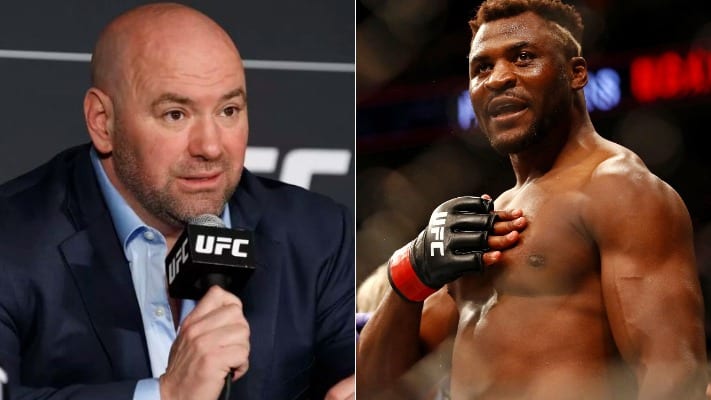 Last night (Sat. June 29, 2019) Francis Ngannou showed why he should be the next man to challenge for the heavyweight title.

“The Predator” finished off ex-champion Junior dos Santos in the main event of UFC Minneapolis with a first-round TKO win. Now, Ngannou is on the hunt for a title opportunity, meaning he’d take on the winner of Daniel Cormier vs. Stipe Miocic at UFC 241 in August.

Speaking to Megan Olivi after the show, Dana White was asked if he thinks Ngannou will be the next challenger for the heavyweight strap. Here’s what the UFC boss had to say:

“You know, so there’s a lot of things that play into what’s next. It’s not as easy as ‘Oh, I won tonight, I’m next for the fight.’ And we know this, I go through this every single time there’s a fight.”

Ngannou is currently on a three-fight knockout streak. He has finished each of his past three opponents – Curtis Blaydes, Cain Velasquez, and dos Santos – in the first round. He earned a title shot back in 2018, taking on then-champion Stipe Miocic in a bout that went all five rounds. Miocic retained his title via unanimous decision.

Following a disappointing showing against Derick Lewis in July of last year, Ngannou seems to have returned to his old finishing ways, reminding the UFC heavyweight roster why he’s the most feared man in the division.

Do you think Ngannou is deserving of a heavyweight title shot next?