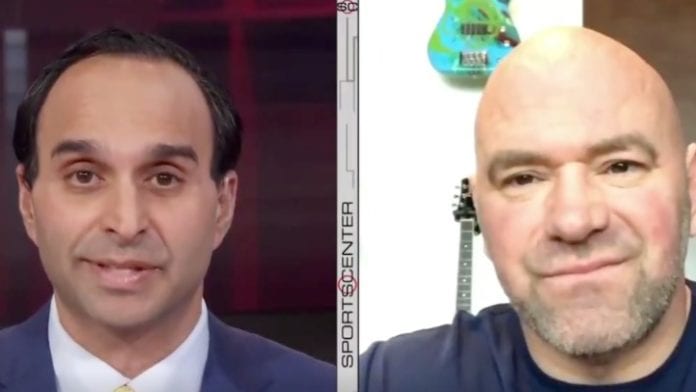 UFC president Dana White is not giving up on Khabib Nurmagomedov vs. Tony Ferguson.

Despite the promotion’s plans for their upcoming events to go ahead, the UFC had to indefinitely postpone its next three events on Monday due to the coronavirus outbreak.

That didn’t include UFC 249, though, which is scheduled to take place April 18 in Brooklyn, New York. Headlining that card is the highly-anticipated lightweight title fight between Nurmagomedov and Ferguson.

And somehow, some way, White plans for it to still go ahead:

“Tony Ferguson vs. Khabib, April 18, is still on and will still happen,” White told ESPN. “We’re going to follow these guidelines to not have more than 10 people in a row. We’re hoping that this all clears up by April.

Hopefully, things clear up by that time as combat sports fans have been waiting to see Nurmagomedov and Ferguson collide for more than a few years now.

For now, it looks like MMA fans will have to go at least a month without any fights.

What do you make of White’s comments? Do you think we’ll finally see Nurmagomedov vs. Ferguson next month?