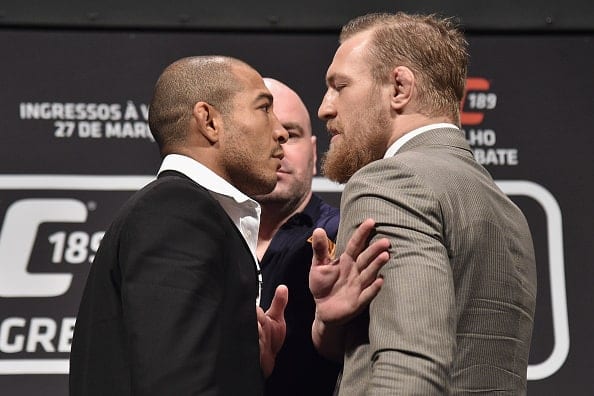 With the thrills and spills of UFC 189 now in the rear view mirror, the MMA (mixed martial arts) world holds it’s breath for the unification of the featherweight title belts. Conor McGregor defeated Chad Mendes in the main event of the monster card in Las Vegas, Nevada, after champ Jose Aldo was sidelined with a rib injury. The talk of the UFC headlining in the Dallas Cowboys AT&T stadium has once again started to hit the news, and an obvious pick for an arena of such magnitude is Aldo vs. McGregor.

The bout now has a notorious storyline, dating back to when McGregor first out the champion’s name in his mouth in 2013, and UFC president Dana White is only too aware of the effect the fight could have on both the promotion and Dallas. Quotes by MMAJunkie:

“It is true; we are looking at (AT&T Stadium) right now,” White said in a recent interview with Sportsnet’s “Tim and Sid” show. “(Andrea) Bocelli is playing at (MGM Grand Garden Arena). The Conor McGregor fight that we had here, the fight we were talking about, had a $200 million impact on the city of Las Vegas. That’s before gaming. Before people take one dollar out of their pocket to gamble, we had a $200 million impact. I think Bocelli is going to have about a $2 impact on the city, but we’re probably going to be going to (AT&T) Stadium.”

That’s a big impact for one UFC show to have on the legendary Vegas strip, and hard to ignore for the New York politicians that recently re-buried MMA’s chances in the Big Apple. White continues, stating the 100,000 seater stadium would be in full use for the probable Aldo-McGregor led card:

“We’re talking about doing the whole stadium,” White said. “I just think you have to go to that stadium with the right fight. Obviously the Aldo-McGregor fight is even bigger than it was. A lot of people believed McGregor couldn’t beat a wrestler. He did that, and the fight is even bigger now. Obviously we’d put together an amazing card, and we could do it in Dallas.”

This could be a game changer for the UFC who, up until this point, have had some rough media coverage. This is both through fault of their own, and also stricter drug testing in the sport catching some of the biggest names on the juice.

Could this be the tipping point for the UFC and also for the winner of the featherweight title. If ‘The Notorious’ can strike gold and knock Aldo from his perch in front of 100K fans, he might just fire in to the stratosphere in terms of popularity. Equally, ‘Scarface’ will probably become the consensus GOAT with a landmark win over McGregor.