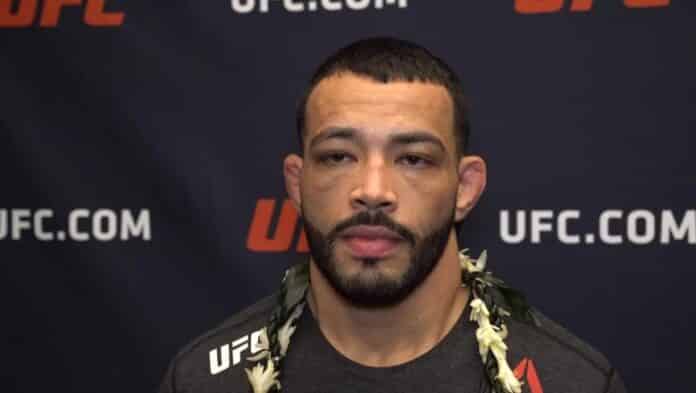 Dan Ige lost to ‘The Korean Zombie’, Chan Sung Jung by a unanimous decision at the weekend. After the loss, he vowed to fight on. There is good reason for his confidence too and the numbers back it up. Since signing for the UFC in 2018, he has amassed 7 wins to a mere 3 losses in a tough division. However, this was his second loss in the past three fights which may be a cause for concern.

Nonetheless, speaking in the octagon straight after his loss, Ige was full of positives and seemed quietly optimistic. The Hawaiian said, “I came in at my absolute best. I have no excuses. The ‘Zombie’ is an absolute legend. I’ve been watching this guy since I graduated from high school. He’s still one of the best in the world – and that’s all I want. I want to test myself against the absolute best in the world. I truly believe I can still be a champion, I just have little small things to work on. I’ll be back better and stronger.” (Transcribed by MMA Junkie)

Perhaps the most interesting take from the interview was that Ige still believes he can be the featherweight champion. He also aimed to come back better and stronger. It’s no secret that the UFC can be a devastatingly hard place to earn a living, let alone make it to the very top. However, this mentality is exactly what Ige needs if he is to continue and make it there. For example, journeyman Michael Bisping had a fairly patchy run at one point of his career. After overcoming this, he became UFC Champion in his late 30s, so it can be done.

After this weekend’s events, Ige is placed 9th in the flyweight division with Chan Sung Jung sitting fourth on the roster. Although a top ten place is nothing to be scoffed at, it’s also a long flight to the top and can be a fragile position to fight in. Dan Ige was previously slated to fight Ryan Hall in his last bout before Hall dropped out with a hip injury. Depending on the result of Hall’s next fight, there is every possibility they could meet up at some point, with Ige desperate to fight on.