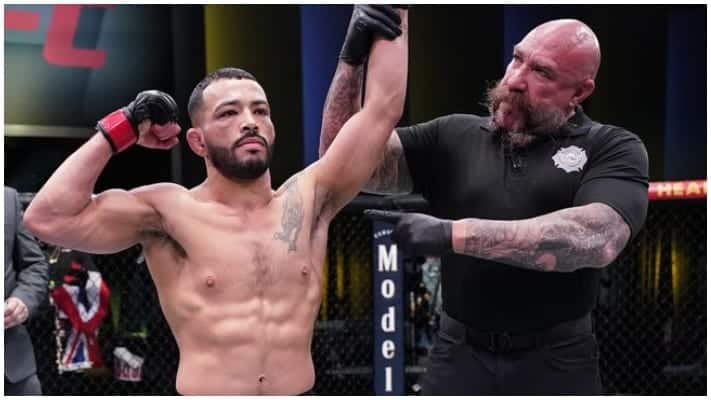 Dan Ige wasn’t surprised one bit with his knockout win over Gavin Tucker.

Ige took on Tucker in a featherweight bout on the main card of UFC Vegas 21 last night. Although he was a slight favorite going into the bout, many observers felt Tucker — who was 13-1 going into the contest — had more than enough skill to come out with the victory.

It took just 22 seconds for that to go down the drain as Ige caught the Canadian with a sniper right hand to get the first-round knockout victory.

As a result, the featherweight contender returned to the win column and also made it seven wins in his last eight outings. And while it was his first clean knockout win in the UFC, Ige knew he always had the power to end fights that way.

“But definitely, and I said it in the press conference before, you know, ‘Fight of the Night’ for me that’s disrespectful. I want a ‘Performance of the Night.’ I don’t want to have a close fight with someone. I don’t want to take unnecessary punishment or damage. I want to go out there, finish fights and get clean kills, and that’s what I did tonight.”

As for who he wants next? The Hawaiian called out The Korean Zombie in his post-fight interview. But in reality, he’s ready to face anyone.

“I mentioned the ‘Korean Zombie,’ but honestly, I’ll fight anyone,” Ige added. “Dana said it, ‘This guy will fight anyone,’ and he wasn’t lying. I risked my ranking tonight against an up-and-coming killer. Yeah, I’m here to fight anyone.”

Who do you think Ige should fight next?