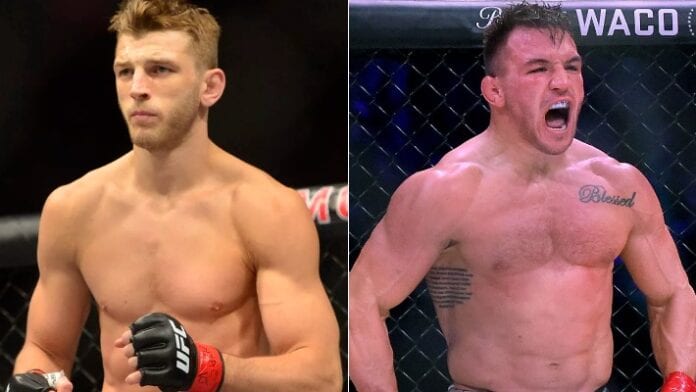 Join LowKickMMA as we looked ahead to the UFC 257 co-main event between top lightweight contender Dan Hooker and former Bellator champion Michael Chandler who has made a PowerPlay by gunning for the UFC’s best in his promotional debut.

Hooker will look to propel himself into lightweight title contention this Saturday. He’ll take on Chandler who has enjoyed a terrific career outside of the UFC and is now looking to cement his legacy in the sports premier promotion.

The New Zealand native has been mixing it with the best for several years now. Hooker holds several high-profile wins overs the likes of Paul Felder, Al Iaquinta and Gilbert Burns but fell short last time out when he squared off against Dustin Poirier in the biggest fight of his career to date.

Chandler has been competing at championship level for some time. He has held Bellator gold on three separate occasions. The 34-year-old also has several big names on his record such as former UFC champions Eddie Alvarez and Benson Henderson. Chandler has been vocal about wanting fights with Conor McGregor and Khabib Nurmagomedov but first must get past Dan Hooker at UFC 257.

Hooker is a slight betting favourite heading into this fight at -138.

That is fair considering he has been mixing it at an elite level for some time. Even if Hooker hasn’t emerged victoriously he has shown tons of heart and skill.

So, how does the favoruite get this done against Michael Chandler?

In our opinion, Hooker has a real chance of making a statement at UFC 257 by knocking out his opponent. The 30-year-old has scored 10 knockouts in his career which amounts to half of his wins.

Hooker is not necessarily a one-punch knockout artist but he is capable of finishing Chandler with punches in bunches or a well-timed kick/knee. His UFC 257 opponent is primarily a wrestler and will probably look to shoot in regularly to take this fight to the floor. Hooker could time the shot and land a knee – something he’s done on several occasions during his UFC run.

If you fancy this to happen you can get odds on +175 odds on Hooker to finish this fight at any time.

In our opinion, his second-best route to victory is via the judges cards. Hooker could use his size advantage to avoid takedown attempts and pick his opponent apart at range.

As this is just a three round fight he should be able to keep up a frantic pace in terms of output, keep Chandler at bay and ease to a unanimous decision win. Again, if you fancy him to do so you will find Hooker via decision priced at +300.

The 34-year-old comes into this bout and his UFC debut with several questions left unanswered about his ability to mix with elite level competition.

Chandler’s last loss raises questions about his chin as Patrício Freire who has spent the majority of his career at featherweight and is one of the smallest lightweight fighters in MMA was able to knock Chandler out inside one round.

How will the +110-underdog deal with one of the bigger UFC lightweights, Dan Hooker?

For us, Chandler has a very clear route to victory in this fight and is via the judges. He’s an extremely talented grappler and Hooker looked vulnerable to takedowns against Poirier last time out.

If he’s going to get it done we think Chandler will use aggressive wrestling to get the win on the cards. And at odds of +250 that may well be worth betting on.

In conclusion, we think this is a huge opportunity for Dan Hooker and Michael Chandler to propel themselves into lightweight title contention. The winner of this bout could well be facing Conor McGregor or Dustin Poirier next for UFC gold.

We’ll be backing Hooker to get the win tomorrow night for several reasons. The first reason is age-related. Hooker is 30-years-old and just about to enter his fighting prime. Chandler is a few years older. His prime years may have been and gone as evidenced by the fact he didn’t hold a Bellator belt at the time he exited the company.

Also, Hooker has a very considerable size advantage heading into this one. This should make him hard to take down while also making it easier for him to land hurtful strikes.

Lastly, Hooker has been competing at such a high level for several years. Win or lose he continues to show improvements and now seems like his time to make a genuine title run.

Chandler has certainly beaten some top-level fighters throughout his career but hasn’t fought anyone on this level for a while. How will he respond to the rise in competition?

Do you agree? Will Dan Hooker stop Michael Chandler at UFC 257?