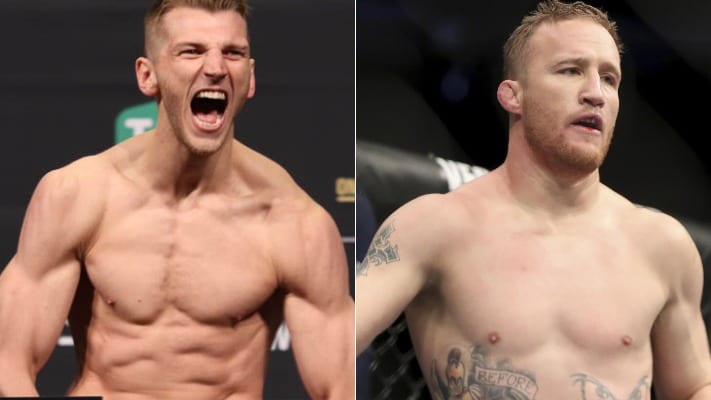 Coming off of a fight of the year candidate, UFC lightweight Dan Hooker is hoping to add another one to his resume against Justin Gaethje.

The City Kickboxing representative has won seven out of his last nine fights, picking up performance bonuses in three out of his last four. Hoping to keep his momentum going, Hooker has his eyes on some of the divisions top contenders. He initially had interest in being Michael Chandler’s first opponent in the octagon, but his hesitation to fight Tony Ferguson has taken some of the shine off his name for Hooker (H/T MMAJunkie).

“Hands down, I want the Gaethje fight,” Hooker said. “Just to me, as a fan of the sport, watching it from the outside, having Chandler turn down the Ferguson opportunity in December kind of takes away a lot of that gung-ho mystique off of him. He was coming into the UFC from another organization saying, ‘I’ll fight anyone, I’m ready to go, I’m ready to step in for the title.’ He stands on the scale and essentially makes weight and that rules him out of a fight against Tony Ferguson which, you beat Tony Ferguson, you pretty much position yourself as that next guy in line for a title shot.

“For him to turn down that opportunity because he stepped on a scale and made weight, like how tough is it for this guy to make weight? For me, it’s not a difficult thing. Making weight for me is fairly straightforward, fairly easy. So that, to me, kinda takes a lot of the mystique off the guy. Him saying he’s ready to go, he’ll fight anyone, ‘Oh wait, I don’t want to fight Tony Ferguson.’ So even for me, fighting Chandler, it takes a lot of the hype that’s behind Chandler away, so it makes him less appealing to fight.”

With a number of other top lightweight contenders already scheduled to face each other – and the future of the lightweight belt still up in the air – Hooker wants to make sure his name doesn’t get lost in the mix. Gaethje, coming off a failed bid for the title, remains the biggest name in the division without a fight. Hooker’s plan is to keep hounding “The Highlight” until that changes.

“One hundred percent Justin Gaethje,” Hooker said. “Whenever he wants to go, that’s the fight I want. I feel like Chandler has lost the mystique around him, so it’s that Gaethje fight. I feel like that’s the fight that lights a fire under me. You watch him fight, the way he fights, the way he knocks people out, the way he finishes different opponents and you can feel the threat so it makes it very easy to train for, when you’re fighting such a dangerous opponent like that.

“It makes it very easy to get in the gym, it makes it very easy to train hard. When you don’t prepare for a fighter like that, who’s as exciting as that, who’s as threatening and dangerous as that, then you gotta drag yourself to the gym. You gotta push yourself through the hard sessions. But a fighter like Justin Gaethje, that’s an exciting fight to me and that’s an exciting fight for the fans. There’s no way that fight doesn’t deliver.”

Indeed, a fight between Hooker and Gaethje seems all but assured to appease the Just Bleed Gods. Combined, they have managed to pick up stoppages in 37 of 42 wins and earn 14 UFC performance bonuses. Let’s just hope the UFC is able to see what they have in front of them and put the fight together.

Do you want to see Dan Hooker and Justin Gaethje Fight? Who do you think wins?