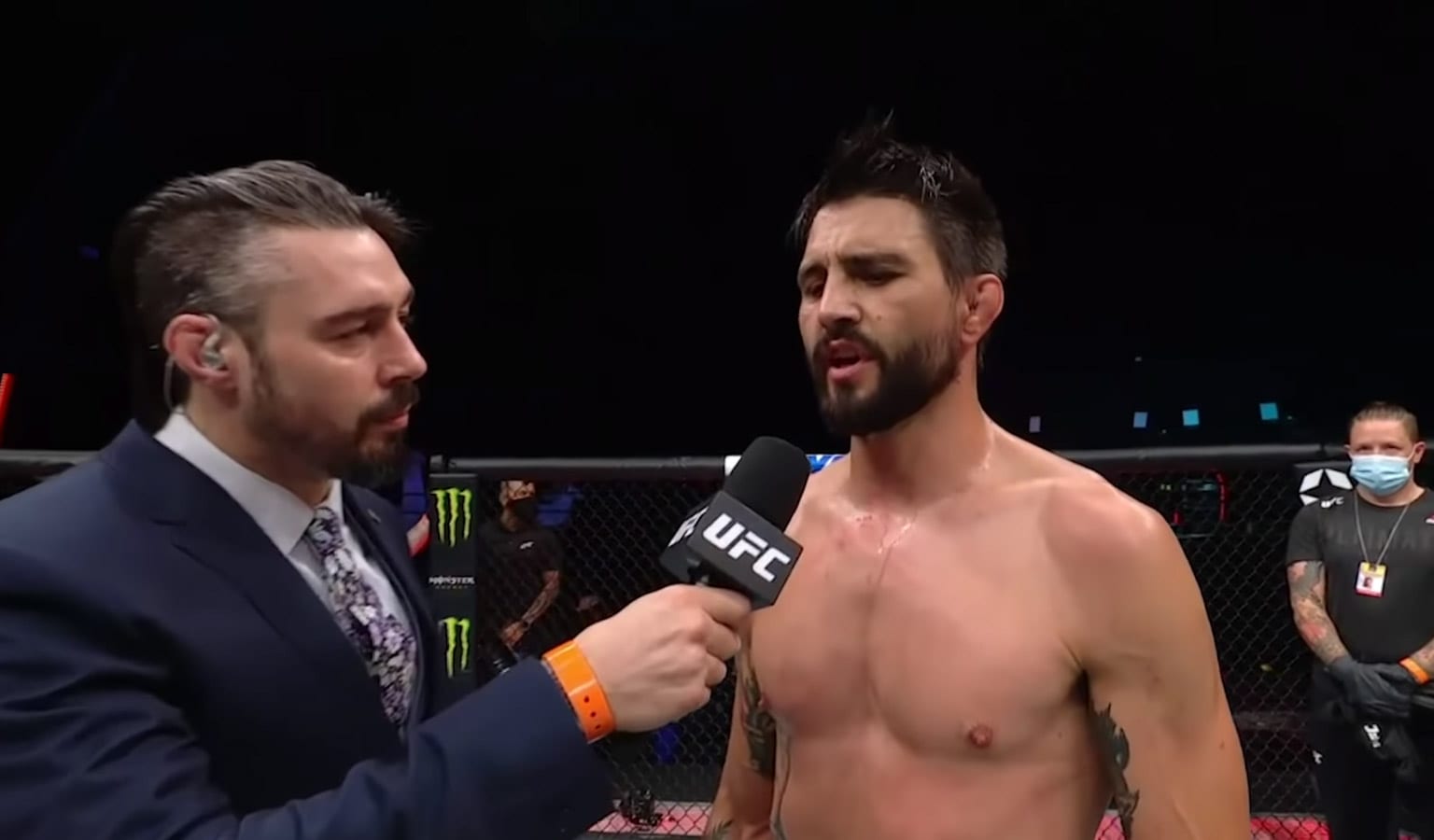 Voicing his interest in a potential re-run with the Nottingham native ten years following their first meeting, Condit confirmed he’d be willing to meet with Hardy once more – with the latter following suit this afternoon, declaring his interest ahead of a much-rumoured comeback to active competition.

Meeting with The Ultimate Fighter 11 victor, Court McGee – Albuquerque native, Condit scored a massive first-round knockdown on his way to a largely comfortable unanimous decision win. The triumph marked Condit’s first win in a period of six fights and just over five years.

Speaking with reporters at a media day ahead of UFC Fight Island 5 this weekend, Hardy was asked whether or not he’d be interested in running back his UFC 120 pairing with Condit – where he suffered the sole knockout defeat of his thirty-six fight career.

“Yeah, absolutely I would (be interested), of course,” Hardy said. “I mean, it’s the only time I’ve ever been stopped with strikes in a fight. And as a striker, that was rather embarrassing – I mean, I laughed at it at the time, but you look back and I’m like, ‘that was stupid of me’.“

“”I learned so many lessons in that fight – and this I felt, and I spoke about this regarding Dominick Reyes, when you come off a fight against a world champion – and I didn’t do well against GSP (Georges St-Pierre), but I got to twenty-five minutes and I spent the next four or five months travelling around the U.S. and everyone was going, ‘a little bit of takedown defence and you’ll be fine’,” Hardy explained. “So then I’m looking at everybody else in the division – especially Condit as a striker, and I’m thinking, ‘well, you’re not GSP so you’re not gonna take me down, so what have you got to offer me’.“

“And I just had complete disregard for his striking power, which was my mistake,” Hardy told. “And you can watch that fight – I mean I stepped in three times and threw the same left hook, ’cause I’d caught him a little earlier in the fight and I saw his eyes spin one time and I thought, ‘yeah. I’ve got his number, I’ve got his range now’. And I just got too eager to chase after it – and he set me up perfectly.“

As mentioned, the defeat marked Hardy’s one and only stoppage via strikes in his professional career – a narrative that’s been painted as a reason to seek revenge opposite the veteran Jackson-Wink MMA mainstay.

“”He looked great the other night, and that’s really what I wanted to see from him,” Hardy said.” ‘Cause I do genuinely believe, he’s up there with the Nick Diaz, (Jorge) Masvidal kinda guys in this division. He’s a lethal individual – he’s ‘The Natural Born Killer’. He’s a great striker, he’s very unorthodox, and he’s back in a place psychologically, as well as physically, where he looks like he could have some good fights. And who would not want payback for the only person you knocked them out, absolutely.“

Hardy called time on his career after amassing a two-fight winning run over the renowned, Duane Ludwig and a September 2012 win over Amir Sadollah – after he was diagnosed with Wolff-Parkinson-White syndrome, but has since been cleared to return to active competition – amid re-entry to the USADA testing pool last year.