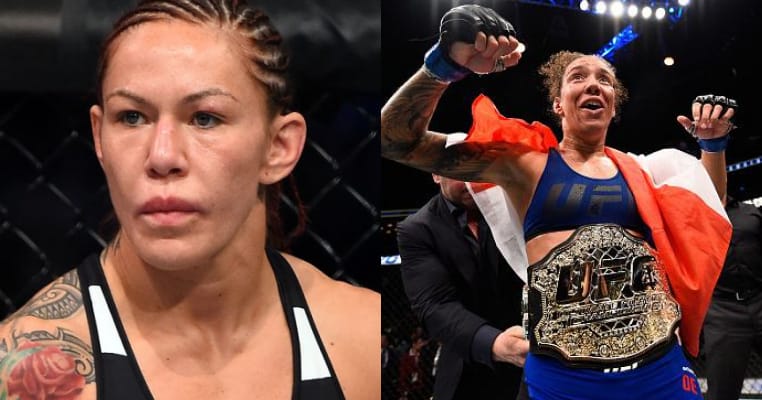 Since its inception earlier this year, the UFC’s featherweight division has been in a bit of a debacle.

First off, the inaugural featherweight champion was crowned in a bout between two natural bantamweights when Holly Holm and Germaine de Randamie in the main event of UFC 208 this past February in Brooklyn, New York. The fight itself was controversial as well, but de Randamie walked away with a decision victory.

Since then, however, she has yet to defend her title and it appears as if she has no interest in doing so against the only logical contender: Invicta FC champion Cris Cyborg Justino:

“Germaine and her team have talked, and the position is that she will not fight Cyborg because Cyborg is a known and proven cheater,” de Randamie’s manager Brian Butler told MMAFighting.com. “Even after so much scrutiny has been put on Cyborg, she still managed to pop for something and will always be a person of suspicion who is trying to beat the system rather than just conforming to the rules.

“For that reason, Germaine and her team don’t believe that Cyborg should be allowed to compete in the UFC at all. If that is the only fight the UFC wants, then Germaine is willing to wait and see if the UFC will strip her belt before making her next move.”

Cyborg has dealt with issues regarding performance enhancing drugs throughout her fighting career and she most recently made headlines when she essentially punched strawweight contender Angela Magana at the UFC’s Athlete Retreat last weekend. Despite her issues, many still consider her to be the very best female fighter on the planet.

Cyborg has expressed interest in competing at UFC 214 on July 29, 2017 and the UFC showed interest in booking her against former bantamweight title challenger Cat Zingano, but that fight has not been finalized.

The Brazilian also responded to de Randamie, saying that while GDR is the UFC champion, she is the world champion:

The toughest opponent @IronLadyMMA will ever fight is her mind. Unfortunately that’s a battle she will have to overcome b4 being world champ

The fact @IronLadyMMA doesn’t want 2 fight is y u cnt take 2 girls from another division 2 fight 4 a belt. World Rankings have 2b respected

Some people are so afraid to lose that they will find every excuse not to try. @IronLadyMMA you can’t doubt yourself champs are confident

How do you think the UFC should handle this situation?