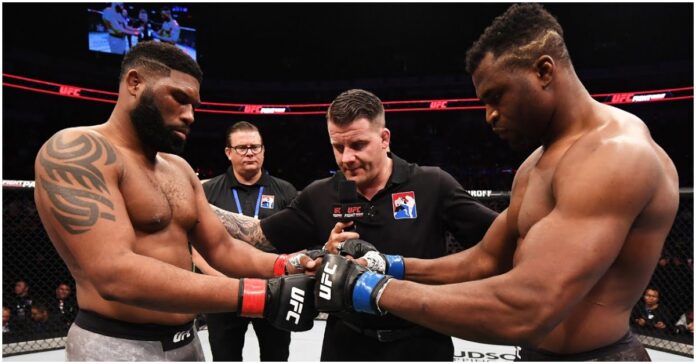 Curtis Blaydes thinks Francis Ngannou should opt against re-signing with the UFC and instead hunt big paydays in boxing.

Ngannou was paid just $600,000 for his latest fight, a unanimous decision win over Ciryl Gane at UFC 270.

The fight was the last on Ngannou’s current contract, which has been extended due to a championship clause in the deal that ties the Cameroonian KO artist to the UFC for one year or three fights – whatever comes first.

It now seems that Ngannou will sit out the rest of 2022 after undergoing knee surgery that is expected to keep him sidelined for nine months.

Blaydes, who has twice fallen to TKO defeats against Ngannou, thinks his heavyweight rival should leave the UFC to secure mega paydays in the world of boxing.

‘Razor’ thinks the current UFC heavyweight champion would be successful in boxing and could beat the likes of Tyson Fury, Deontay Wilder, and Anthony Joshua.

“Based off the top boxers at heavyweight division I’ve watched, I think he does well,” Blaydes said. “I think he has the reach. We know has the explosion and the athleticism. With those gloves, he may not have the same impact, but I think he can beat any of those guys.”

Blaydes has been happy to see several MMA fighters cross over into boxing and make good money during the latter stages of their combat sports careers.

“It’s always good to know that there’s something on the other side of MMA, because you can’t fight forever, and at the end, you just want to get your money,” he said. “That’s always going to be a good avenue. If you’re doing up your name and brand in the UFC and MMA, you have the opportunity to transition over into the boxing world, and you can make a lot of money at the end of your career.”

Do you agree with Curtis Blaydes? Should Francis Ngannou leave the UFC?