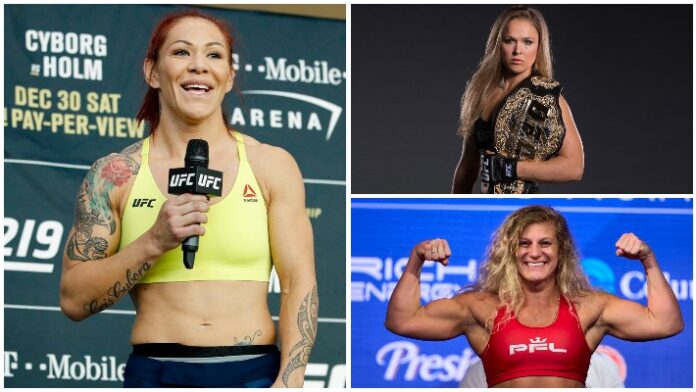 A super-fight between the two WMMA legends was often talked about and at one point seemed to be on the cards.

Unfortunately, it never came off and almost certainly never will with Rousey being out of the sport for some time now.

Over the past few years, another Olympic judoka has risen to prominence. Kayla Harrison has amassed a perfect 11-fight MMA record and has been tearing through the PFL’s 2021 lightweight tournament.

The two-time gold medal winner eased into the final at PFL 8 when she scored a first-round TKO over Genah Fabian, who didn’t land a single strike in the fight.

Post-fight, Cyborg took to social media to confirm she is ready to fight the PFL starlet at 155lbs. Harrison has just one fight left on her current contract with the promotion before she becomes the most sought-after free agent in MMA. Cyborg is hoping Bellator will be able to convince Harrison to sign on with them, at least for one fight.

“I think it’s going to be a great fight for me,” Cyborg said when appearing on The MMA Hour. “She doesn’t need to come in at 145, we can fight at 155. She said [it was] the last fight on her contract, too, I saw and I believe maybe she’s going to sign with the UFC, but she can make more money than Amanda Nunes in PFL.

“I don’t know it’s going to be worth [it], but maybe we can do one fight, champion vs. champion. Scott Coker can be my co-promoter, maybe in the future. It’s a great fight.”

Cyborg thinks that the former Strikeforce and UFC bantamweight champion, Rousey, would’ve presented a much sterner test than Harrison.

“I was supposed to fight Ronda Rousey before and I was training for a camp,” Cyborg explained. “The first thing you train in judo is learn to fall. Because when you’re going to fight judo, maybe you’re going to fall yes, but you have to know what to do after.

“I believe Ronda Rousey was more dangerous than Kayla. Her transitions were fast, her technique was fast and I know [Kayla] got a gold medal in the Olympics. But I think it’s a different level about the speed, about the transitions for the submissions.”

Do you agree with Cris Cyborg? Would Ronda Rousey have been a tougher fight than Kayla Harrison?