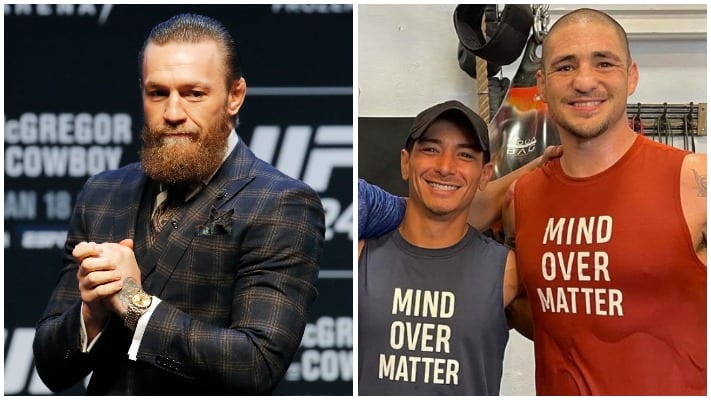 The Irishman is hard at work preparing for an eagerly anticipated trilogy fight against Dustin Poirier which will take place on July 10 at UFC 264.

Despite that, McGregor has found the time to take a keen interest in the career of Sanchez which has taken a turn for the worse in recent weeks.

‘The Nightmare’ was by the promotion before his proposed retirement fight against Donald ‘Cowboy’ Cerrone at UFC Vegas 26. The trouble began when Fabia requested all of his former fighters’ medical records prompting the UFC to ask Sanchez to confirm he was healthy to compete on May 8. On the advice of his lawyer, Sanchez refused to do so. Soon after he was cut by the UFC and Alex Morono was announced as Cerrone’s new opponent.

In the immediate aftermath of this release Sanchez stood by his friend and began attacking the UFC. The 39-year-old even said he feared for his life after speaking out against the fight promotion.

Soon after, a video of Sanchez and Fabia training together went viral. In a clip taken from the video, which was quickly removed from YouTube, Sanchez is suspended upside down and is taking clean shots to the face from Fabia. ‘The Nightmare’ later put his guard up as Fabia throws kicks at him.  McGregor was one of the many fighters who spoke out against the barbaric training techniques employed by Fabia.

Now that Sanchez has severed ties with Fabia, McGregor wants to see the two men settle their differences inside the cage.

‘Notorious’ is even willing promote the fight through McGregor Sports and Entertainment according to his latest social media post.

Do you want to see Conor McGregor promote a fight between Diego Sanchez and Joshua Fabia?