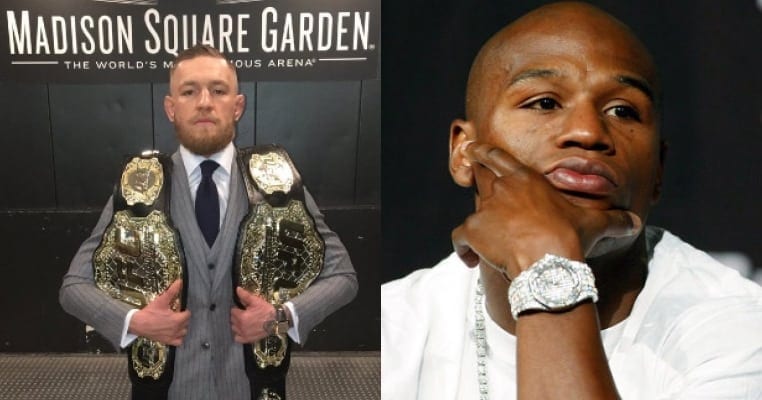 In the four days since Conor McGregor‘s win over Eddie Alvarez in the main event of last weekend’s (Sat., Nov. 12, 2016) UFC 205 from Madison Square Garden, much of the talk in the MMA world has been focused on just whom ‘The Notorious’ will fight next.

There’s a potential rubber match with Nate Diaz, and even a possible welterweight title fight versus Tyron Woodley, yet the one outrageous prospect that just won’t seem to fade away is his oft-discussed (but hardly realistic) boxing match with undefeated champion Floyd Mayweather Jr.

It could be becoming a bit more realistic after McGregor made history, and indeed the two superstars have kept the hype rolling by throwing smack talk at each other in public interviews. The Irishman continued that last night when he appeared at 1 OAK nightclub in NYC (courtesy of TMZ Sports), proclaiming that Mayweather didn’t want a ‘real fight’ in the DJ booth:

“He wants a boxing match, he doesn’t want a fight.”I want a $100 million cash to fight him under boxing rules. He’s afraid of a real fight.”

As the biggest name in the UFC by a wide margin right now, McGregor almost made headlines right after his win over Alvarez when he demanded a stake in the UFC after new owners WME-IMG purchased the booming company for a staggering $4.2 billion this summer.

That may sounds like an extremely ridiculous proposition, but if his history in the UFC is any indication, McGregor gets what he wants. Given his recent track record of smashing records each and every fight, his employers may have no choice but meet him at the bargaining table.

The fight with Mayweather, while a distant possibility, is still a possibility, and would be a bout that had the potential to break every modern pay-per-view (PPV) record. It’s also an extremely lofty amount Mayweather’s team may not agree to pay ‘The Notorious.’

Will McGregor vs. Mayweather ever happen? Should it?