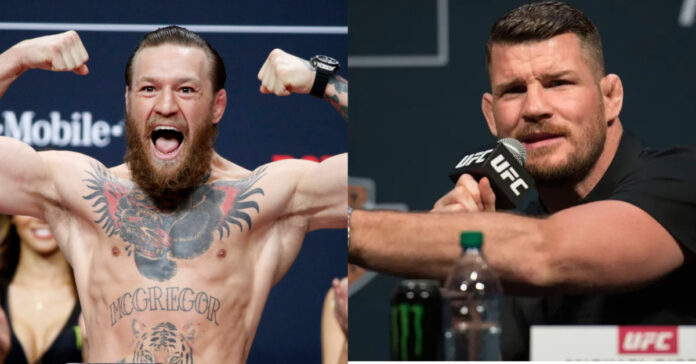 Conor McGregor has fired back at Michael Bisping after the former middleweight champion threw shade on the Irishman’s acting career.

Conor McGregor has ventured into different avenues since being side-lined from the devastating injury he suffered at UFC 264. Most recently the former two-division champion has undertaken a career in acting by joining Jake Gyllenhaal in the remake of Road House.

As can be expected of McGregor, he was quick to lay claim that he is the best fighter to transition into the world of TV despite this being set to be his first appearance in a film.

In a since-deleted tweet, McGregor stated that he is the ‘Mac Daddy’ of acting and now other fighters aiming to enter the entertainment world are simply trying to follow in his footsteps.

“Little twerps, There’s Only One Mac Daddy. Bad to the bone but with a good heart. Action with Jake [Gyllenhaal] or Rom com with Sarah Jessica [Parker].

“Bisping, member that show you were in. Ye me neither.”

Having seen what McGregor claimed, Bisping was quick to respond in what he says was a light-hearted manner to the ‘Notorious’ comments over on his YouTube channel via the ‘Believe You Me’ podcast.

“He’s all excited, he’s had his first beer and he’s doing a big show with Jake Gyllenhaal, god bless him. Good for f***ing you. Well done. Why have you gotta throw shade my way? I don’t get it,” Bisping said.

“Just make sure you’ve got your bodyguards around you the next time you come and wanna talk some s***. You little f***.” (Transcribed by TalkSport)

Although Bisping said everything he stated in regard to McGregor should be taken in a light-hearted manner it appears the Irishman has done anything but that.  Conor McGregor once again responded in a series of now-deleted tweets threatening Michael Bisping should he continue to mention his name.

“Bisping you’ll do f*** all you little sprinter I’ll cave your head in.”

McGregor added to his initial response through a voice note which has since been deleted.

“Security. You little sausage of a thing. I’ll have security set you up … when you’re in Vegas again, pal.

“Keep my name out of your f****** mouth again or any type of threatening behaviour, or I’ll walk through your front door. You little dope.

“[Go] back where you belong you little clown, you little sprinter.” (Transcribed by MMAFighting)

It is extremely likely that these two will cross paths in the future with Bisping firmly cemented as part of the UFC broadcast team and McGregor aiming to return to the octagon in the early stages of 2023. Only then we will be able to see just how serious this feud could become.

What did you make of Conor McGregor’s comments toward Michael Bisping?