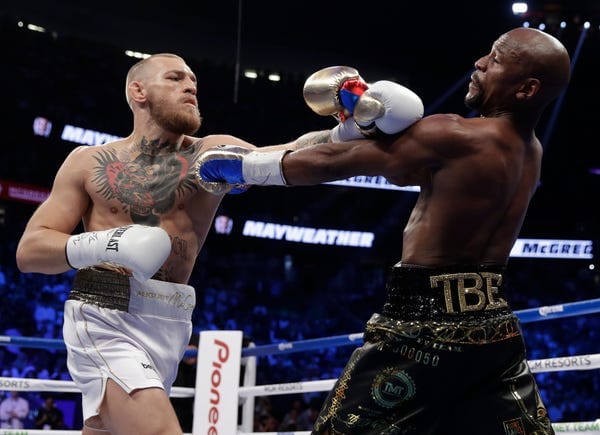 Conor McGregor tweeted out to Iron Mike Tyson last night after Tyson had some strong words to say about the former two-weight division champion. The former heavyweight king praised the Irishman for his performance against Floyd Mayweather Jr. in August 2017, claiming McGregor’s ability to not only last ten rounds with the best boxer in the world but also to make the fight competitive, proved the fact that he indeed did belong in the same ring with him.

McGregor responded on Twitter to the Tyson interview clip, “Thank you Mike, and just know that for the inevitable rematch, with the knowledge I now hold of Floyd’s style, plus under the tutelage of my old school boxing coach, I will crack the puzzle, and I will beat Floyd. I promise my life on it. It is great to see you back Iron Mike”

It remains to be seen whether or not we will see McGregor and Mayweather will duke it out inside the squared circle again, but it certainly seems like the Irishman is planting the seeds for a future massive pay day. Mike Tyson recently talked about a return to the ring for a charity exhibition matchup, while also posting a clip on his Instagram of him hitting the pads.

The Irishman meanwhile was last seen defeating Donald “Cowboy” Cerrone in January and has been rumored for a return on Fight Island in July, but nothing has come to fruition quite yet. It’s certainly an interesting scenario for McGregor, he has a lot of options on the table. Perhaps, we’ll see ‘Notorious’ in a boxing ring once again sooner rather than later after these latest comments.

So what do you think? Is Conor McGregor serious about promising his life that he will defeat Floyd Mayweather Jr in a rematch?