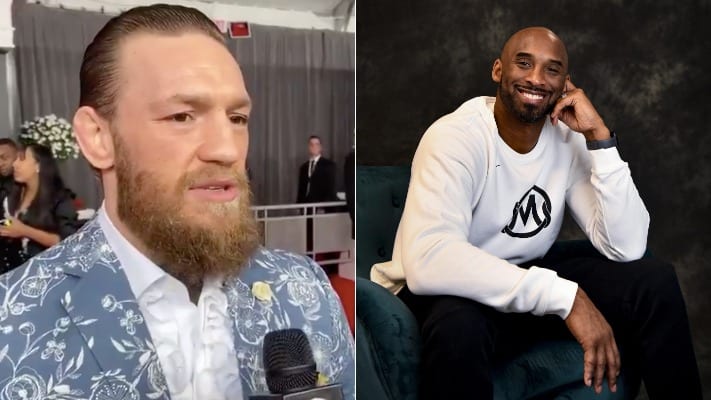 Yesterday (Sun. January 26, 2020) the sports world was rocked with the news of the tragic passing of NBA legend Kobe Bryant.

Bryant, along with his teenage daughter and seven others, was killed in a helicopter crash in California yesterday morning. “The Black Mamba” was on his way to take his daughter to a basketball tournament at his own gym. It remains unclear why the helicopter crashed. The mixed martial arts (MMA) community expressed their sorrow for Bryant’s passing online yesterday after news broke.

Now, UFC megastar Conor McGregor has offered his reaction to the tragic news during an interview at the Grammys, which McGregor attended at the Staples Centre last night. McGregor said it was hard to get up for the event given how sad everyone is after Bryant’s untimely passing.

“It’s very very sad news, you know,” McGregor said. “It’s iconic that I’m here [Staples Center] and he used to play in this arena as well, right? So, it’s just very sad news. Lost his daughter as well. I’m just – I don’t know. It’s hard to kind of get up for this event, right? I’m very happy to be here, but I’m sad at the same time. It’s just a very sad time.”

McGregor then elaborated on the impact Bryant had on the sports world. While he and his fellow Irishman back home don’t particularly follow basketball closely, the star power of Kobe Bryant goes far beyond sports.

“Yeah, well for me, the first time I ever came to America, Kobe was one of the big stars and one of the men that jumped out,” McGregor said. “We don’t really understand basketball back home too much, you know? But Kobe, his star transcends sport, and a great man and I would’ve loved to meet him. It’s a very sad day.”

What do you make of McGregor’s comments on Bryant’s passing?