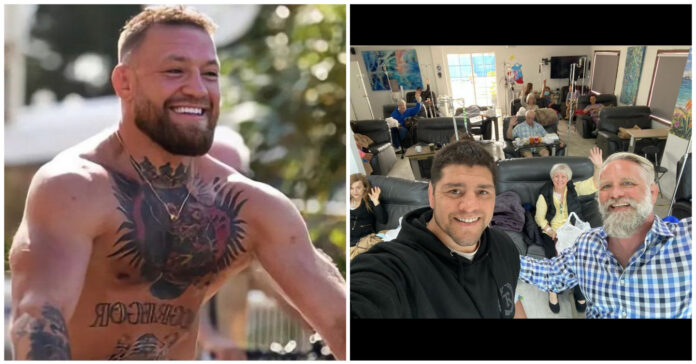 Conor McGregor has heaped praises on Nick Diaz for his charitable visit to a hospital.

Nick Diaz has been a mainstay in MMA before the UFC became the beast we know it to be today. The former Strikeforce, WEC and IFC welterweight champion made his way to a hospital in order to talk to cancer patients about “fighting fear and staying strong during a fight.”

Although ‘The Notorious’ has faced off against Nate Diaz, the younger brother of Nick, on two occasions, he still holds immense respect for his adversary’s sibling.

Nick Diaz talks to cancer patients at a hospital

Nick Diaz was last seen in action competing against Robbie Lawler at UFC 266 in September 2021. He looked phenomenal in the outing for as long as it went on. Lawler dispatched him in the third with a TKO. There were signs of ring rust and the time off would’ve surely factored in given Diaz returned after a six-year hiatus.

The Stockton native likes to maintain a low profile and doesn’t promote the good stuff he does. In a post uploaded to Instagram, Scotty Nelson shared a photo of Diaz’s charitable visit to cancer patients at a hospital.

Taking to Twitter, Conor McGregor commended Diaz’s charitable visit to the hospital and labeled him a proper legend of the sport.

It appears that the Irish superstar is in jovial spirits. He even argued striking techniques with Rafael Fiziev on social media in a more respectful way than we have become accustomed to.

It’s reminiscent of the 2014-16 Conor McGregor when his trash talk would pierce through like an arrow sharpened with logical theories as opposed to angsty pubescent insults.