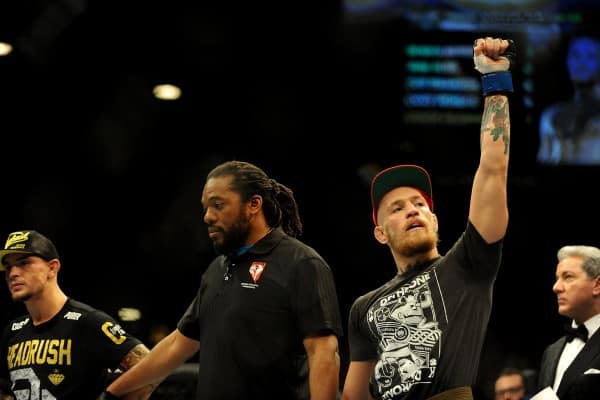 In news that probably should surprise no one, UFC interim featherweight champion Conor McGregor has offered to fill in for the injured Joseph Duffy against former foe Dustin Poirier in the main event of this Saturday night’s (October 24, 2015) UFC Fight Night 76 from the 3Arena in his native Dublin after “Irish Joe” was forced out with a concussion suffered last week.

”Notorious’ took to Twitter to offer his services to fill in on short notice even though he has a pivotal showdown with champion Jose Aldo at December 12’s UFC 194, stating he would take out “Peanut Head” like he did at UFC 178 in 2014:

I will give peanut another crack at the King no sweat. I’ll take the gate. It’s my gate anyway. A cool 7. Cash. See you at the weigh ins.

After three wins over Marcus Brimage, Max Holloway, and Diego Brandao to start his career, McGregor’s star power absolutely exploded after his trash-talk fueled feud with Poirier, who returned to his original weight class of lightweight following a first round loss to McGregor.

It’s highly unlikely that McGregor could replace Duffy, who ironically is the last man to defeat McGregor with a rear-naked choke in 2010. Still, the ‘Notorious’ is probably right when he suggests that the record-setting €1.15 million gate is ‘his’ anyway.

And truth be told, he’s probably the only one who could save this devastated card.