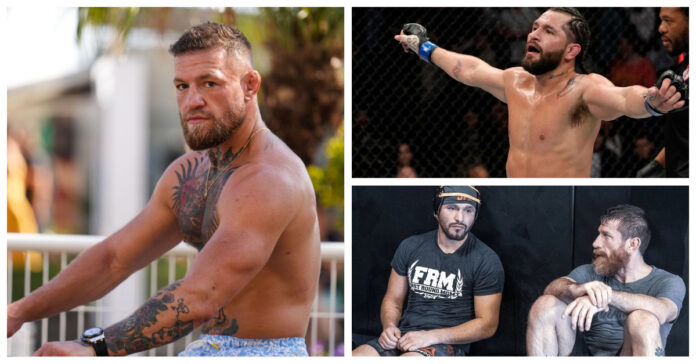 Conor McGregor has responded to claims made by Jorge Masvidal’s coach.

McGregor has remained out of action since his last outing against Dustin Poirier at UFC 264. While he has been swift in recovery from the broken fibula he suffered, other fighters have called out for a potential showdown with the biggest draw in the sport.

‘The Notorious’ fires back at Mike Brown

Jorge Masvidal took his aim at the Irish superstar as he called him “false” and accused him of being “too scared” to accept the fight with him. Not one to keep shy, McGregor was quick to respond to the Florida native in reference to his alleged physical altercation with best friends turned rival Colby Covington.

‘The Notorious’ called Masvidal “an absolute pigeon brain” following his comments. Masvidal hit back at McGregor claiming he won’t accept an offer to get the biggest paycheck of his life.

In the past, UFC President Dana White had shut down talks of a potential matchup between the two stating that Masvidal was too big for the former two-division champion. McGregor has expressed interest to take on the reigning UFC Welterweight king Kamaru Usman although an immediate title shot may not be the best option.

As McGregor jacks up for a return back to 170-lbs, Masvidal’s coach Mike Brown rallied behind ‘Gamebred’ for a contest with him. In a now-deleted tweet, Conor McGregor responded to Brown’s comments with some incendiary statements.

“Mike Brown is a little smell bag. Never a champ. Never produced one. Take a shower Mike the pong of B.O off you.” (h/t Mirror)

Masvidal is one of the biggest stars in the promotion and is arguably the second biggest draw after ‘Mystic Mac’. A collision between the two will almost guarantee massive numbers at the box office and make for good business for the UFC.

Do you want to see Conor McGregor fight Jorge Masvidal?