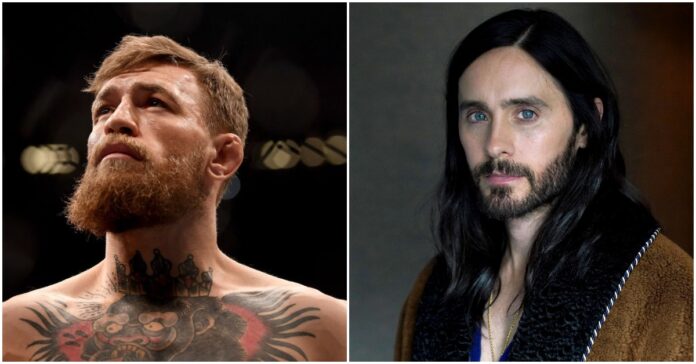 Conor McGregor has responded to Jared Leto after the actor expressed his interest in playing ‘Notorious’ in a movie.

Once the Irishman had heard about Leto’s interest, he took to social media to invite the film star to come and practice the part with him.

“Jared Leto, I invite you to come and practice the part with me!,” McGregor wrote.

Jared Leto admitted to being a massive mixed martial arts fan himself. When recently asked in an interview which role he would like to play in a potential film the American showed interest in McGregor as well as UFC president Dana White. Although the now 50-year-old actor acknowledge that his time may have passed to be able to fulfil a role as McGregor.

“Well, I am a huge UFC fan and I’m a huge Dana White fan. I hope he is a huge Jared Leto fan too. Maybe I could play Dana White. That would be great. If we do the UFC movie, if I was younger, I’d play Conor McGregor. I got the beard. What Conor does and what these guys and gals do is just extraordinary…. I’m too old to do Conor, probably, but you never know. We could maybe use some CGI.”

Although Leto would love to star as the Irishman in a film, McGregor himself will still have to wait to return not the UFC, following his devastating leg break against Dustin Poirier at UFC 264. However, UFC boss Dana White isn’t concerned about arranging a match for McGregor on his return just right now.

“I’m not worried about [finding McGregor an opponent] because, first of all, Conor is not even fighting right now. He’s not back until the fall – if everything goes right. So, a lot of the match-ups will play out this summer and whoever wins or loses, when Conor is cleared by a doctor and ready to go, we’ll figure out who’s next.” (transcribed by sportskeeda.com)

How do you think Jared Leto would do starring as Conor McGregor?