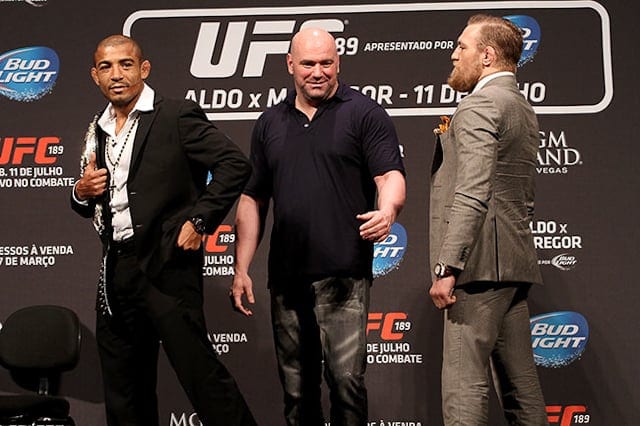 Following months of heated back-and-forth hype including a 10-city World Championship Tour, featherweight title challenger Conor McGregor was understandably angry that his rival Jose Aldo pulled out of their scheduled UFC 189 main event on July 11 from Las Vegas, Nevada, with a rib injury.

The Irish superstar, who will now face former title challenger Chad Mendes for the interim belt, didn’t mince words during today’s (Wed., July 1, 2015) UFC 189 media conference call (via MMAjunkie), blasting Aldo to the fullest as has been the norm for months now. If it was up to ‘Notorious,’ Aldo would be stripped of his belt altogether for not agreeing to participate in a bout that he was supposedly cleared medically for:

“If a man pussies out, and he’s pussied out time and time again, (then he should be stripped). He’s pulled out of contests time and time again. I mean, the medical reports state he is fit to fight, so there’s no more questions. If you’re fit to fight and you’re not going to fight, the belt rightfully should be stripped, and this (should be) for the regular featherweight belt.”

Although McGregor’s words may be harsh, the truth simply states that Aldo has withdrawn from almost as many UFC title fights as he’s actually participated in, winning seven in total compared to the five he’s pulled out of. In these days of seemingly endless injured champions, losing the titleholder in a bout of this magnitude, which some deemed the biggest fight of all-time, is simply a blow that the promotion has little room to forgive.

True, injuries certainly do happen in MMA, and the UFC knows that all too well, but at some point, it has to be examined if Nova Uniao’s training practices are a bit too much given the sheer amount of times Aldo finds himself injured heading into pivotal fights.

That doesn’t mean he should necessarily be stripped of his title outright, because as the world’s No. 1-ranked pound-for-pound fighter and the only featherweight champion the UFC has ever known, Aldo undoubtedly deserves his chance to prove he is still miles ahead of the rest in the Octagon.

Hopefully, he’s healthy enough to do that against McGregor at some point.

Listen to the full UFC 189 media conference call below: