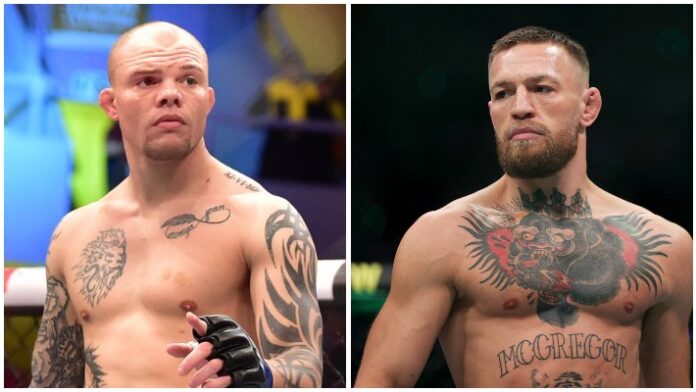 Conor McGregor has fired back at Anthony ‘Lionheart’ Smith.

“I can’t handle the tweeting stuff,” Smith said. “I didn’t like it when he was attacking Khabib (Nurmagomedov) and his family and his religion and the personal stuff. Me and Luke Rockhold have gone back-and-forth several times and neither one of us has ever attacked each other personally. Even Jon (Jones) and I — I mean, it’s got a little personal but it hasn’t really crossed over to like, too much. He’s made some jokes and he thinks he’s funny and whatever. but it’s never gotten to that point where we were attacking each other’s families.“

“With Conor, it’s just — it’s too far, it’s way too far,” Smith explained. “Take all this fighting bullsh*t out of the picture — like people get shot for a lot less than that just walking down the street, I don’t know. Maybe I just grew up (sic) different. Maybe I’ve grew (sic) up different and I’ve seen some crazier sh*t.“

“Like I’m just so shocked that he (McGregor) has the balls to — like I don’t understand why you feel so free to say things like that, like is he really that untouchable and really just feels like he’s just free to say what he wants?” Smith continued. “Maybe, I guess he’s got a bunch of security around him. There’s some people that you can’t talk like that about. It’s just — it’s weird to me.“

On Saturday, McGregor took to Twitter to respond to Smith’s comments.

“@lionheartasmith who’s getting shot for what? What the fuck are you saying you big zombie,” McGregor wrote on social media. “The disrespect coming my way consistently is what is causing my response. Are you stupid? You do not see this? Fuck off and leave me alone you losers. You nobodies. I’m preparing to return.”

Do you agree with Conor McGregor? Is he simply responding to people attacking him?