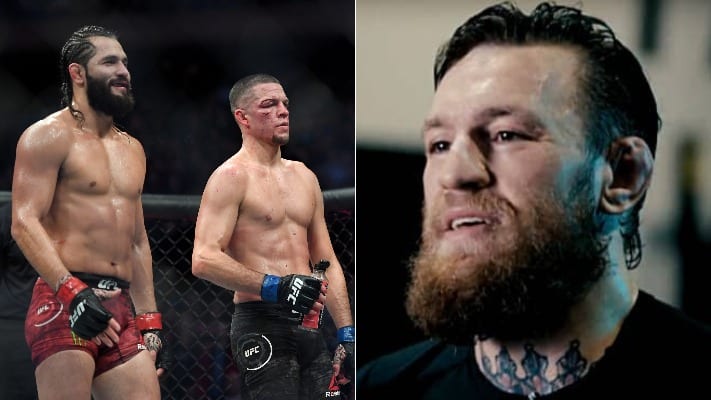 Conor McGregor was one of many fans who thought the ending to the BMF Title fight between Jorge Masvidal and Nate Diaz at UFC 244 this past November was a huge disappointment.

After Masvidal dominated the first three rounds of the fight, cutting Diaz up badly, the doctor stepped in and decided to wave the action off. However, many spectators didn’t think the cut was bad enough to warrant stopping the contest. Speaking in a recent interview with The MacLife, McGregor said fans were “robbed” of the rest of the fight with the controversial doctor’s stoppage. (H/T BJPenn.com)

“I wasn’t really that happy with how that BMF thing ended. I think it’s unfinished, in my opinion, that belt is unfinished. It was only getting into a good bout, I believe. We were robbed of rounds four and five in that bout,” McGregor said.

McGregor will make his own return to action on January 18 when he faces Donald “Cowboy” Cerrone in the main event of UFC 246 on pay-per-view (PPV). The fight takes place at 170 pounds, a division McGregor now has championship aspirations for.

Do you agree with McGregor and think fans were robbed from the Masvidal vs. Niaz BMF Title fight?