LowKickMMA.com
Home MMA News Conor McGregor Did Not Want To Do TUF With Urijah Faber 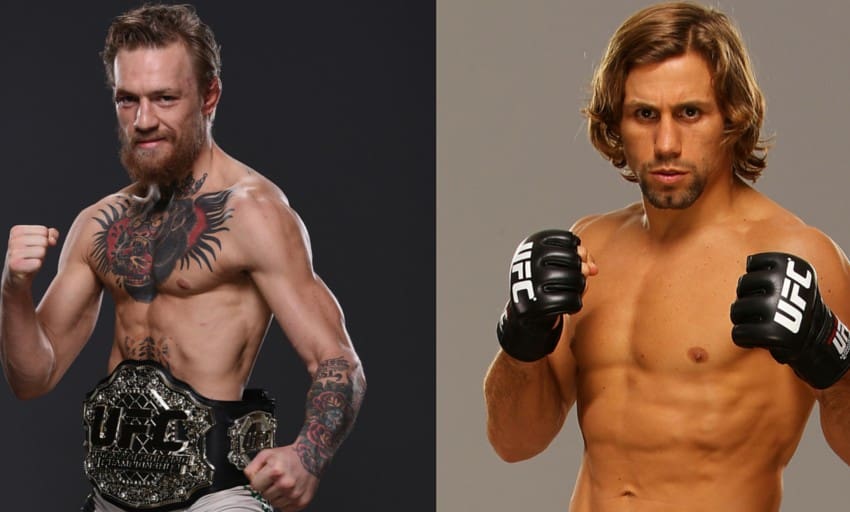 The Ultimate Fighter (TUF) 22 is set to debut in just a few weeks on FOX Sports 1 and the show pits two teams against each other. One team will feature a group of American fighters coached by “The California Kid” Urijah Faber, and the other will feature a group of European fighters coached by interim featherweight champion the “Notorious” Conor McGregor.

However, it wasn’t always the plan to have McGregor coach against Faber at least according to the Irish superstar who recently spoke up to FOX Sports about the topic.

Originally, McGregor was supposed to coach opposite Faber’s teammate Chad “Money” Mendes who happens to be one of the best 145-pounders around. However, when Jose Aldo was forced out of his mega bout with McGregor at UFC 189, we now know that Mendes stepped in to meet McGregor, which ruined the UFC’s plans:

“Before the fight I was excited. A few weeks before hand there was a few different options. Potentially it should have been, Jose (Aldo) should have showed up and it should be me coaching against Chad (Mendes) for the next fight. That was the original plan,” McGregor said.”

While he was excited to coach against Mendes, and eventually fight him after, McGregor admits that once the UFC picked Faber, he lost all of his excitement. McGregor and Faber won’t be fighting after the show, and the Irish champion said that he didn’t even want to do the show after the switch:

“Then obviously what happened, Jose pulled (out) and it just threw the plans up into the air. Then, they give me Urijah (Faber) as the coach, they won’t let me fight him, so my energy was gone from it. I did not want to do it. It did not mean anything to me.”

Although he may not be happy about coaching on the show, McGregor will indeed get the fight he wants soon after the show’s end as he is set to finally take on reigning featherweight champion Jose Aldo in a title unifier on December 12, 2015 at UFC 194.

Who are you picking, McGregor or Aldo?