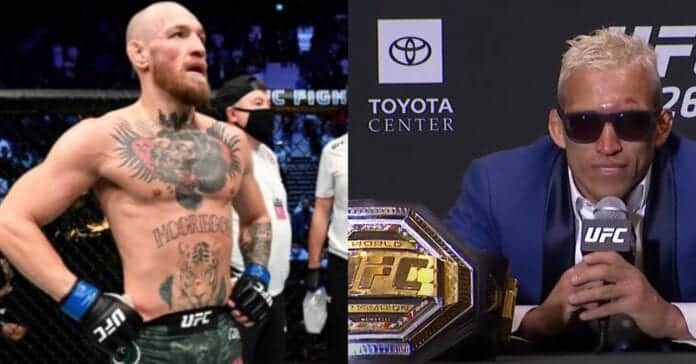 Conor McGregor congratulated Charles Oliveira — before hinting he would be the next champion.

Oliveira became the new lightweight champion after coming back from adversity to TKO Michael Chandler in the second round of their title fight in the UFC 262 headliner.

McGregor was certainly watching as he took to Twitter soon after the fight concluded.

“Congrats to Olivera on becoming the 11th UFC lightweight champion. Wonder who Twelve is…”

McGregor was naturally implying that he would be the next champion. That prompted a reply from Oliveira during the post-fight press conference.

“Conor, since you’re so tough, first beat Dustin, then come to Brazil and I’ll put you on your ass,” Oliveira said. “He’s just one of these guys that talks a lot. He needs to beat Dustin first.”

Fortunately for McGregor, he can do just that in less than two months when he takes on Poirier in the UFC 264 headliner which takes place July 10 in Las Vegas.

Whether he can actually do it remains to be seen, though.