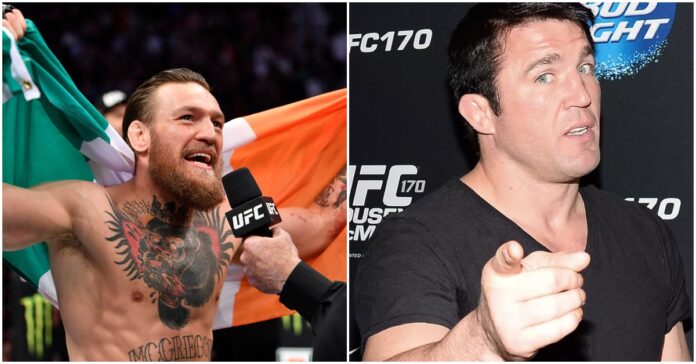 Conor McGregor and Chael Sonnen got into a back-and-forth argument on Twitter last night which ultimately led to ‘The American Gangster’ threatening the former two-division champion.

It is well known within the MMA community that Conor McGregor enjoys the occasional wind-up on Twitter, and poking fun at basically anyone involved within the UFC. So, it came as no surprise when McGregor found himself in a back and forth with one of the best trash talkers MMA has ever had in Chael Sonnen.

Sonnen was hosting an episode of ‘The Chael Sonnen Show with Jorge Sedano’ where he went on to speak about McGregor and the way he holds himself following his leg break during his trilogy with Dustin Poirier and referring to him as a ‘little rich weirdo’.

However, ‘The American Gangster’ was not done there going onto say this about McGregor after the Irishman posted a video of himself pacing around the room in the build up to Max Holloway and Yair Rodriguez’s main event bout at UFC Vegas 42.

“It’s the last thing I wanted for him but if you mark out for your own gimmick to this extent… He’s posting things, then he’s deleting them. I’ve got to give the troll effort 100%. As a former troll myself, I get it.

“If they’re in the UFC, you didn’t step foot in it, you didn’t throw a single punch and you can steal a headline on ESPN+, you’re doing something well. But in all fairness, Conor’s not going to step in there with Max any more than he was going to step in with the guy last week, the week before that, or whoever he pulls out of his hat for next week. He’s got to heal himself.

“There’s talk of Dustin Poirier who has already smashed him twice. In all fairness, Conor is still a big draw, but he’s really working against himself. He’s being a weirdo. Is this what he wants as his identity? A guy walking around with his shirt off screaming at a television set. I mean, come on. In all fairness, when you were 22 years old that was one thing, but as a husband and a father, you’re a little bit of a dork.”

The Clip from the show can be found here:

It came as no surprise to really all of us when McGregor chose to not let this go and had a few choice words for the former UFC Competitor, the Irishman himself took to twitter to share his thoughts on the matter calling Sonnen a ‘little broke

“It’s not too late to stay off my radar Just put down the shot-glass of awful bottom-shelf whiskey, turn off your phone, and back outta the big-boy saloon niiiice n’ sloooow...,” Sonnen replied.

The Irishman then took shots at Sonnen’s YouTube channel by writing.

“Just set up the tripod, in the corner of your boxroom, and tell your 2 views the promo code is for window sheen”

The argument would fizzle out with both only having one more remark for the other with Sonnen saying: “Oh: And leave a nice heartfelt apology on the table as you exit”. To which McGregor replied:“A nice tip.”

Who do you think got the best of this exchange? Chael Sonnen or Conor McGregor?