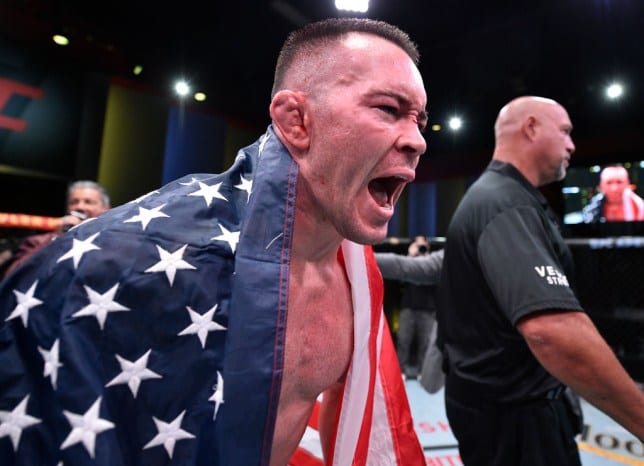 Colby Covington vs Jorge Masvidal seems to be the logical next fight to make in the Welterweight division, however according Covington’s comments the fight isn’t close to being done and he blames Masvidal for it.

Speaking to Submission Radio Covington said “I’m good to go on my end, I’m ready to go. I gave them my verbal (agreement), and I’m a man of my word. I’m gonna show up and do what I do best, that’s win and fight hard, (and) put on a show for the fans around the world.”

“Getting Jorge ‘Street Judas’ Masvidal on board is a whole other story, the guy, I mean, he’s got no options, and he thinks he’s gonna fight Conor (McGregor), he wants the easy fight with the ‘soy boy’ Nate Diaz.” Covington stated. “The guy is desperate right now. You don’t want to fight the No. 1 guy in the world? I’m the No. 1 guy in the world.”

He added, “Where’s he at now? Now you haven’t heard a peep out of him. He’s completely silent. I think it’s going to show the fans the truth, and he’s gonna lose all that street cred. All that street cred for being a badass mother (expletive), for being a street king and a street fighter, and just the baddest dude who would show up at any time, he’s losing all that credibility by the day, because he’s nowhere to be found.”

Its well documented that Covington and Masvidal were best friends and training partners and even cornered each other in the past. Covington believes that Masvidal is avoiding the fight as he knows what happened in training.

He continued “They (UFC) said it was gonna be a tough task because he doesn’t want to fight you. They pretty much told me that he plain and simple told them that he doesn’t like the style match-up. You’re in the UFC fighting the best fighters in the world, you claim to want to be the best in the world, and you don’t like a style match-up? Like, what is this, The Real Divas of Atlanta? What are we doing? I thought we were the Ultimate Fighting Championship, not the Ultimate Feelings Championship. That’s why he’s never been the Ultimate Fighting Champion. He’s been nothing more than a broken mediocre fighting champion.” (Transcribed by MMAJunkie)

The 32 year old last appeared in the octagon in UFC Vegas 11 main event when he stopped former Welterweight champion Tyron Woodley in the fifth round and after the fight he proceeded to call out the champion Kamaru Usman and Jorge Masvidal. While Gambred last fought at UFC 251 for the Welterweight Championship on 6 days notice in fight island where he lost a unanimous decision to the champion Kamaru Usman.

Do you think we’ll ever see Covington vs Masvidal?