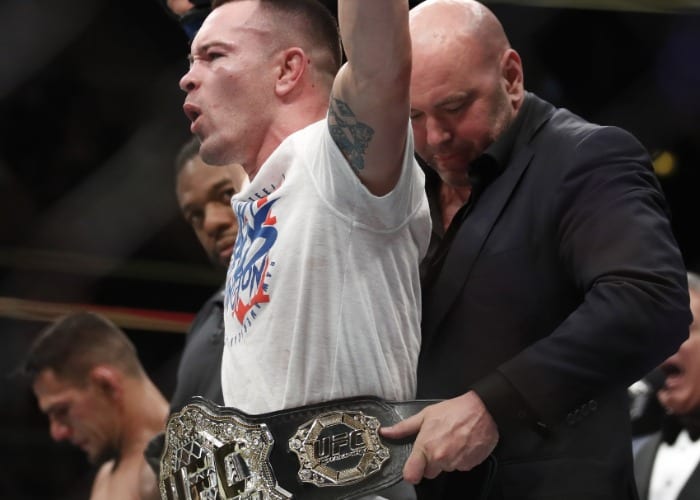 Covington challenges for the welterweight title when he faces bitter rival Kamaru Usman in the main event of UFC 245 this Saturday. It will be Covington’s first official attempt at winning the undisputed title and it’s been a long time coming, especially since he won the interim title back in June 2018.

White, having stripped Covington of the title, is a big reason why as the two haven’t seen eye-to-eye since. Because of that, Covington has promised that White will not wrap the belt around him if he beats Usman:

“Everybody knows I ain’t got nothing to say to Uncle Fester,” Covington said on Wednesday’s athlete panel (via MMA Junkie). “He’s not going to wrap that belt (around my waist) on Saturday night. I promise you that.”

Although it’s a tradition for White to wrap the belt around the champion’s waist, “Chaos” isn’t too bothered by breaking it. He felt the tradition came to an end when The Rock ended up putting the BMF title on Jorge Masvidal at UFC 244 last month:

“It was tradition until they did the ‘Broken Mediocre Fighting’ championship last (month) in New York, and they gave away that Bernie Sanders participation trophy, and they let The Rock put it on ‘Journeyman Jorge’ (Masvidal),” Covington added. “So, I want Candace Owens to put it around my waist on Saturday night.”