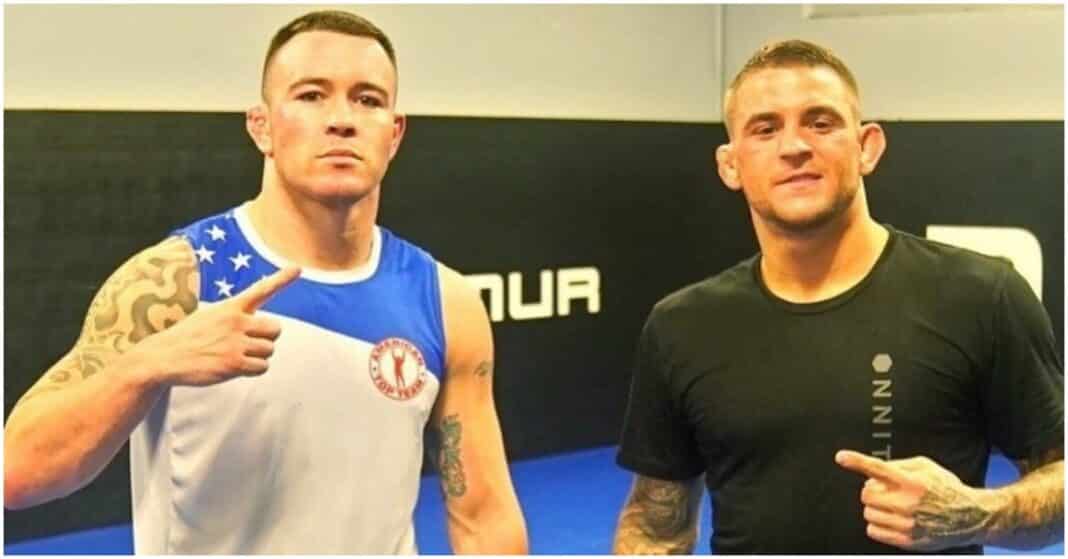 Colby Covington may have broken character for a few seconds in the immediate aftermath of his UFC 268 main event with Kamaru Usman but he was back to his usual self at the post-fight press conference.

‘Chaos’ fought valiantly but ultimately suffered a unanimous decision defeat to ‘The Nigerian Nightmare’ this past weekend. As soon as the final bell sounded, Covington gave props to his bitter rival but his tune changed once he sat in front of the media.

Covington called Usman a cheat and vowed to earn a third crack at the welterweight champion. The 33-year-old aims to do that by squaring off against his former teammate and friend, Jorge Masvidal, who he also had some not-so-nice things to say about.

The former interim champion then turned his attention to another former teammate, Dustin Poirier, who he claims is naturally bigger than him and cuts a massive amount of weight to compete against smaller fighters at lightweight.

“I remember that Louisiana swamp trash Dustin Soyrier, we used to step on the scale at our old gym all the time and he weighed bigger than me. I was, like 182, he’d be like 185-188. So, he’s a bigger guy than me,” Covington said at the UFC 268 post-fight press conference. “I’m not scared to fight guys at my weight. He’s obviously scared to fight guys his weight. He has to cut all this weight to feel like he has an advantage over guys.

“He’s another guy, it makes sense for that fight. He talks so reckless in the media. How are these guys not going to be held accountable? He said, ‘Hey, it’s on sight. When I see Colby it’s on sight.’ Dustin, name the site let’s do it, man. Bring that little jezebel of a wife. Bring that little kid you use as a prop and let’s get this going, man. I’m holding people accountable in the UFC, they are not going to be able to talk reckless and not being able to step in the cage. If he doesn’t want to fight, he loses his street cred too and he’s nothing more than Louisiana swamp trash.

Colby Covington Is Open To A Catchweight Fight With Dustin Poirier

Covington could probably cut down to lightweight for the fight but is unwilling to do so. He called for Poirier to meet him at a catchweight or fight at his natural weight class of 170lbs.

“Na,” Covington replied when asked if he would drop down to 155lbs to fight Poirier. “I don’t feel like depleting myself and going through that struggle. It’s not a tough cut for me at ’70. It’s really easy but we could do something in the middle, 162 maybe, but I don’t feel like cutting all that weight. I’d rather fight at my natural weight class and show the world you don’t need to cut weight to be the best in the world. You’ve just got to show up and fight and prove that you’re the best.”

Do you want to see Colby Covington vs. Dustin Poirier?