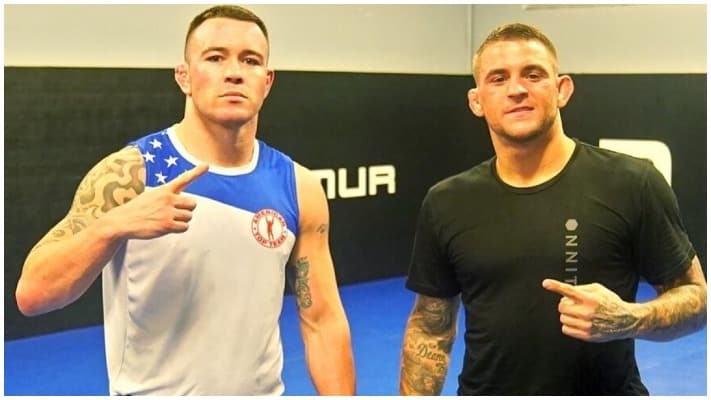 Poirier and McGregor are set to complete their trilogy of fights at UFC 264 on July 10. Both men currently hold one win each over the other. The pair first met in 2014, with ‘Notorious’ picking up a quick KO win during his sensational run to featherweight gold. Earlier this year, ‘The Diamond’ avenged his most famous defeat and did so in style. Poirier wrestled early before utilizing leg kicks and elite-level boxing to become the first man to KO McGregor in MMA.

Covington has had a well-documented falling out with Poirier since leaving American Top Team. ‘Chaos’ insists that the former interim lightweight champion is not what he appears and tried to prove his point recently by showing media members a video of Poirier taunting an amateur sparring partner he had just knocked out.

Despite his personal feelings towards Poirier, Covington believes it will be the Louisiana native that will get his hand raised in the UFC 264 main event.

“Yeah, he’ll probably beat Conor again,” Covington told MMA Fighting while appearing on What the Heck. “But, I mean, what is that saying?

Covington is admittedly a fan of McGregor but believes the Irishman is no longer motivated to fight and is coming to the end of his career in MMA.

“It’s just not the same hungry Conor from a couple of years ago. It’s a different Conor towards the end of his journey and it’s not saying much to beat him anymore.”

Do you agree with Colby Covington? Will Dustin Poirier beat Conor McGregor at UFC 264?