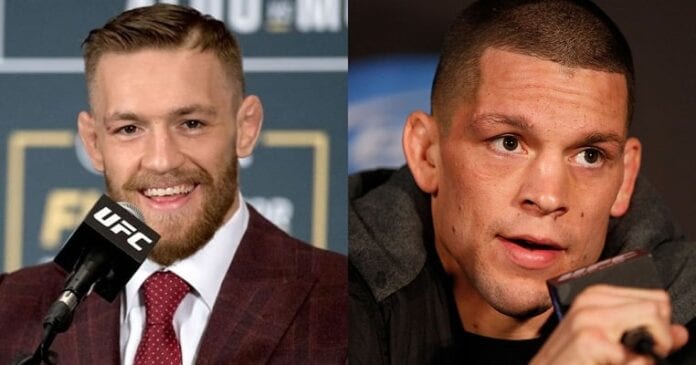 Conor McGregor may have been awarded a majority decision win over rival Nate Diaz in the main event of UFC 202 on August 20, 2016, but the decision didn’t come without controversy, as some felt as if Diaz should’ve been the victor. In fact, Diaz’s longtime boxing coach, Richard Perez, feels as if the judges were on McGregor’s side so that a third ‘money fight’ between McGregor and Diaz could be set up:

“I watched it when I came home. I came home and watched it four or five times already, and the judges were going for McGregor. I mean, you could tell. It’s obvious. And I figured, okay, they want a third fight. You know, a company just bought it out, they want to make more money. They just bought the UFC. If I bought the UFC, I would try to make it as best as I can to get a third fight, to make more money. That’s a money-maker right there. That’s a big money-maker – more than any other fight that’s happening now. So they would be smart to do a third fight.” Perez told Submission Radio.

Perez also claims that a trilogy bout is the only bout to make despite UFC President Dana White recently saying that he was moving away from the rivalry. Perez also said that pitting the two against each other would result in the biggest payday for everyone involved:

“You know and I know and the media knows that it was such an awesome fight, I mean, it was like a storm. Everybody’s telling me, I wanna see that again. They want to see that again. That’s gonna be the most big payday for both of them, and for the business, the new UFC people that own it. So if they’re smart enough, they would do it. They will set that up. There’s nobody else. If Nathan goes and fights B.J. Penn or Georges St-Pierre or anyone like that, or even if McGregor (fights them), that’s not gonna be a money-maker. Because those guys haven’t fought in a long time and they’re not action fighters like Nathan fighting McGregor. If anything, Georges St-Pierre will take him to the ground and just hold him and just wrestle him around. And then he’ll probably beat him up because McGregor’s not good on the ground, so he’ll probably tap him out.”

“If I was the UFC owner, I would say let’s do number three again. After that, he can go back to 145 if he wants, or 155. That’s where they’re fighting at, 155 – which is good if they fight at 155, because if Nathan wins he can go for the belt. But that’s not what he wants. Just like McGregor, they want the money. They want paydays.”

Aside from the payday, Perez also simply said that there’s ‘unfinished business’ between the two:

“Unfinished business. (There needs to be) Number three.”