LowKickMMA.com
Home UFC News Coach: Jon Jones vs. Israel Adesanya Will Happen, But It Won’t Be... 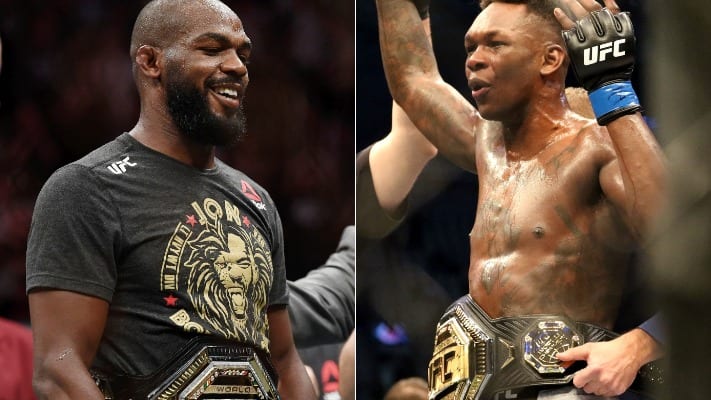 The pair have been going back-and-forth with one another via social media over the past several months. Adesanya is currently preparing to make the first defense of his 185-pound title, while Jones is gearing up to make yet another defense of the 205-pound championship he has held for so long against Dominick Reyes in February. Recently, Jones’ coach, Mike Winkeljohn, spoke to BJPenn.com to discuss Jones’ beef with “Stylebender.””

“That would be up to Jon if he stays at light heavyweight. If Jon goes up to heavyweight by then, it is hard to bounce back down,” Winkeljohn said. “It is not that easy to change 15-pounds efficiently and still fight. We have to make a decision of going up and fighting for the belt or staying at 205 and cleaning out the division until Adesanya wants to come up.”

In regards to a possible fight between the two champions, Winkeljohn admitted any such fight would all depend on whether or not Jones opts to jump up to heavyweight, or remain at 205 pounds to clean out the division.

“I think it might happen. That young man needs to get bigger and gain some weight because Jon just dwarfs him. Jon beats him in so many places because of his skill and size,” Winkeljohn said. “But, Israel is an incredible strike, there is no doubt about it, and has good wrestling defense. But, he needs to gain weight before he thinks about fighting Jon. Like everybody, he is looking to challenge the top dog to get his name out there and the top dog is Jon. If it happens, it is down the road.”

As for how the fight would play out, Winkeljohn believes Jones’ size advantage will simply be too much for Adesanya to handle. That, mixed with Jones skillset, will present the middleweight champion with quite a bit of adversity to overcome. If Adesanya wants to make the fight more competitive, Winkeljohn suggests Adesanya pack on some more weight.

Do you agree that Jones vs. Adesanya will, in fact, happen down the line? Who are you picking in the potential matchup?