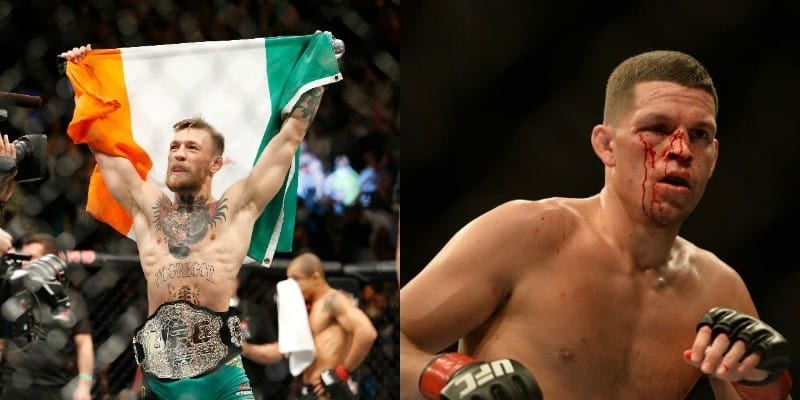 With lightweight champion Rafael dos Anjos pulling out of his scheduled super fight with featherweight champion Conor McGregor, it was announced last night that Nate Diaz will step in to meet McGregor on just 11 day’s notice in the main event of March 5’s UFC 195.

While a title won’t be on the line, McGregor vs. Diaz is still a huge fight in its own right. Not only do the two possess contrasting styles of striking, but they also happen to be two of the best trash talkers in the sport, even having a history with each other to show for it.

As for how the fight will play out, it’s hard to tell given the short notice.

The “Notorious” one infamously predicted that he would “dust” dos Anjos in less than a minute, and it appears as if Team McGregor feels just as confident going up against the Stockton native.

McGregor’s long-time head coach, John Kavanagh, recently spoke on the fight, noting some of Diaz’s past performances, including his 2013 knockout loss to Josh Thomson.

All in all, Kavanagh doesn’t feel as if this one is going to last too long (via The42.ie):

“You must be ready for every type of opponent. As for Nate, if you look at his last fight when he beat Michael Johnson by decision, Michael comes from a great team but he is quite new to striking, yet he still managed to land a lot of shots. Josh Thomson badly lit Nate up when they fought in 2013. The Diaz brothers are known for walking through shots but Nate doesn’t quite have Nick’s ability to absorb punishment. It’s a different ballgame when you face somebody who has been striking for their entire life, as opposed to a wrestler who’s still trying to develop their striking. I think it will be an early night for Nate.”

The weight at which this bout is taking place at is also interesting to note.

McGregor, who holds a title at 145-pounds, was jumping up ten pounds to clash with dos Anjos, but he will now move up two whole weight classes to fight Diaz at welterweight.

Who do you see walking away with the victory in this highly anticipated affair?