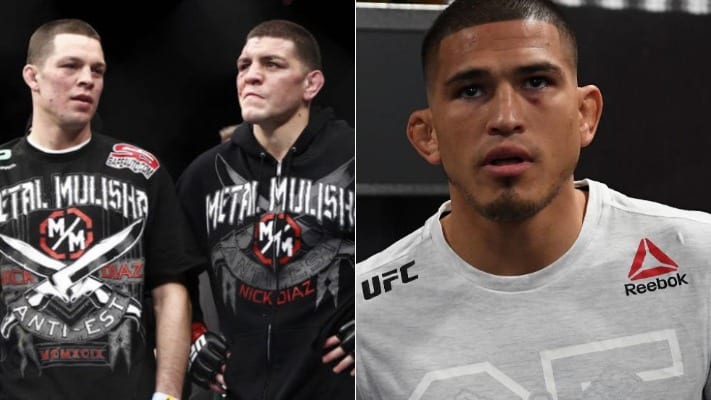 This weekend (Sat. August 17, 2019) one of the most highly-anticipated fights of the year will take place.

Nate Diaz returns to the Octagon after nearly a three-year layoff to take on Anthony Pettis at welterweight. There have been some personal issues between the pair over the years. According to Pettis’ coach, Duke Roufus, who spoke on “The Ariel Helwani MMA Show” yesterday (Mon. August 12, 2019), both Nick and Nate Diaz tried to jump Pettis at a nightclub several years ago.

“For years Nate has just attacked him,” Roufus said. “Not only verbally, but even in a nightclub, they tried to jump him, him and Nick. It gets to a point where stuff just boils over. I get the perspective of where Anthony is coming from. To me, Anthony reminds me a lot of Oscar De La Hoya or “Sugar” Ray Leonard, he’s that star fighter, he’s got that charisma.

“A lot of guys just – it’s not even professional, it’s more, these guys are jealous, envy of him. It causes a weird energy. Like Fernando Vargas tried to bully De La Hoya, De La Hoya knocked him out. Like Duran tried to do twice against “Sugar” Ray Leonard, “Sugar” Ray Leonard put it on Duran the second time.

“Like Mayorga tried to do to Oscar De La Hoya. So many guys try to bully Anthony, I love it, because it brings out the best in Anthony. Looking forward to it, sometimes fights are personal, and those are the fun ones if you ask me.”

However, Pettis denied ever coming face-to-face with either of the brothers. Regardless of what happened in the past, Diaz and Pettis will get the chance to settle the score this weekend in Anaheim.

What do you think about how personal the rivalry between Diaz and Pettis is? Who are you picking this weekend?