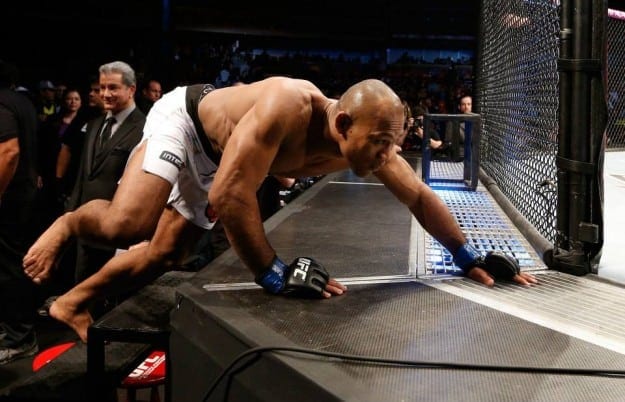 Ronaldo Souza dos Santos is on a hot streak at middleweight right now. Ever since joining the promotion back in 2013, the talented grappler has looked like hot property. Really coming of age at UFC Fight Night 28, “Jacare” smashed former top contender Yushin Okami with his much improved striking. As well as a decision over Francis Carmont, Souza has earned his #4 middleweight spot with his recent Fight Night 50 demolition of Gegard Mousasi.

Now arguably in with a shout for a title shot, Souza is left with a decision to make, especially after Chris Weidman vs Vitor Belfort got pushed back; Does he fight on, or wait it out. But, according to “Jacare’s” coach Josuel Distak, there is a third option for the Brazilian “Alligator”. Check out what Souza’s coach told Sherdog:

“I believe Jacare already proved that he deserves a shot at the middleweight title, but, once he’s recovered from this second elbow surgery in January, it’s the same time as Chris and Belfort, so what can we do? I like the idea of putting Jacare in a special light heavyweight fight. I truly believe that, with the exception of Rafael ‘Feijao’ and Rogerio ‘Minotouro,’ Jacare can fight anyone in that division as preparation to face the winner of Vitor and Chris.”

“I don’t think it’s fair that Jacare should cut weight to fight in the division where he’s ranked No. 2. Jacare already fought in open-weight matches during his jiu-jitsu career. I would love to see him facing Henderson in February, on the same card that Belfort will face Weidman. Henderson is a legend, and the fans would love to see that match up. But, Ronaldo could face anyone in that division except Rogerio and Feijao. I don’t see any problem with making that test. The world needs to know the potential of Ronaldo Jacare.”

So instead of sitting dormant or risking his spot at middleweight, Souza’s camp are proposing a light-heavyweight bout against Hendo….interesting, to say the least. The ageing “Desperate” Dan has been in 42 wars in a career that spans back to 1997, when fighters were pretty much all roided up animals. That being said, it was a ton of fun to watch.

Anyway, fast forward to present day and Hendo has lost four from his last five. A crack at Souza is either a swansong for Henderson, or a golden opportunity to get back up the rankings. What do you think, is Jacare Souza vs Dan Henderson worth booking, or are the Brazilian’s camp angling for winnable fights?