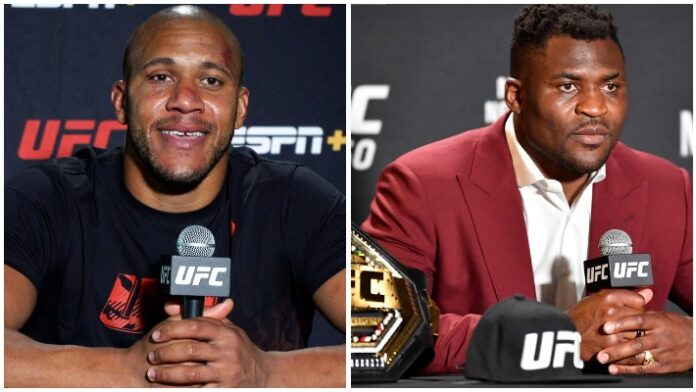 Ciryl Gane doesn’t feel any type of sympathy for the UFC heavyweight champion, Francis Ngannou, who is facing the prospect of an interim champion in the division he conquered just three months ago.

‘The Predator’ won UFC gold in spectacular fashion when he knocked out Stipe Miocic in the second round of their eagerly anticipated rematch.

Ngannou was all set to make his first title defence against Derrick Lewis at UFC 265 on August 7. However, things quickly changed last week when ‘The Black Beast’ was matched up with Gane who’ll square off for the interim heavyweight title in Houston, Texas next month.

According to Ngannou’s manager he was unable to make the August date but was ready to defend his title in September. Apparently, that didn’t sit well with the UFC and Dana White who quickly abandoned their plans to match Ngannou against Lewis.

Gane admits he was a little surprised to hear he’d be facing Lewis for the title but insists he doesn’t feel bad for Ngannou who is now set for an extended stay on the side-lines.

“I was a little bit [surprised] because we thought it would be Francis against Derrick Lewis, but Francis wasn’t free for the fight in August so they chose me,” Gane told MMA Junkie.

“I can understand [where Francis is coming from] but [I don’t feel bad for him],” Gane explained. “It’s just an interim title, so the champion is still Francis. Not really [feeling bad] for Francis. If I was Francis, this would be nothing for me.”

Gane is hoping he’ll still get the chance to fight Ngannou, preferably in France.

“Just for the history,” Gane said.  “I would prefer [to fight] Francis Ngannou in Paris, [mostly] for the fans.”

Do you agree with Ciryl Gane? Or do you feel bad for Francis Ngannou who is facing the prospect of an interim champion in the division he’s just become champion in?