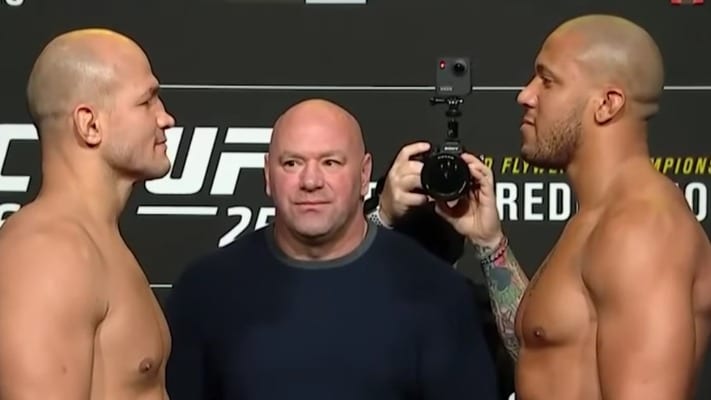 Opening up the UFC 256 main card is a heavyweight encounter between Junior dos Santos and Ciryl Gane.

Round 1: Gane starts off with some kicks. He clinches up with dos Santos and has him up against the fence but decides to return to striking. Gane lands a leg kick but dos Santos returns with a right hand. Gane lands another leg kick. Dos Santos just misses an uppercut. Gane throws a body kick which is partially blocked by dos Santos and has more success with a head kick right after. Dos Santos lands a low kick this time. Dos Santos partially blocks another head kick. The fight is momentarily stopped as Gane accidentally kicks dos Santos on the groin. The action resumes soon after. Gane lands a barrage of kicks mostly to the the leg of dos Santos. Gane is given complete freedom to kick as he mixes up where and how quick he kicks. Dos Santos partially lands a spinning back kick to Gane. He connects with a right on Gane and is swinging but Gane is in no major trouble as the round ends.

Round 2: Gane continues with the kicks to start off the second round. Gane has also shown a liking for jabbing the body. They clinch up soon after with dos Santos up against the fence just as it seemed like he landed a nice right. Dos Santos misses with a swing and Gane lands a low kick which seems to have hurt “Cigano.” Gane lands a huge jab that disorients Dos Santos before an elbow drops him en route to the finish!