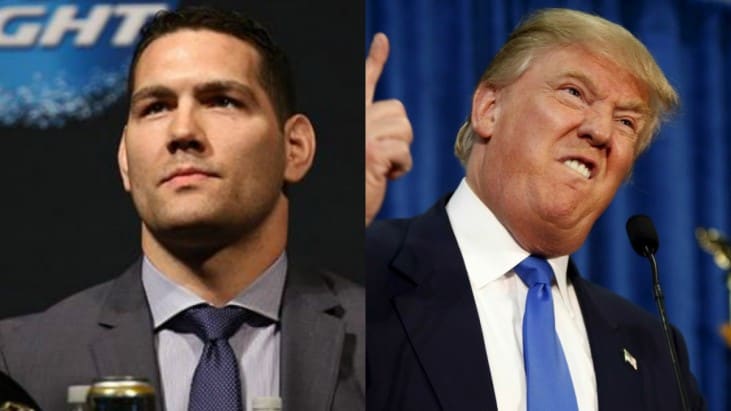 Chris Weidman may have solidified himself as the UFC’s main “All-American” fighter when news came last week that the middleweight champion had signed an exclusive Reebok sponsorship deal and was even getting his own American flag-based shoes in red, white, and blue.

And heading into his highly awaited UFC 194 tilt with surging rival Luke Rockhold, Weidman apparently wants to make his political affiliations known before the 2016 Presidential Election. Earlier this year the champ appeared in a Q&A with MMA Digest (via Bloody Elbow) to voice his strong support for wild GOP candidate Donald Trump. Check out his reasoning:

“I like Donald Trump, I listened to his speech. I think we need him in the country, I’m not gonna lie. He’s a little over the top, but a lot of the stuff he says is on the money, I think, on what this country needs. And hey, my wife is Puerto Rican, my kids are Latino and I don’t take it personal on what he said about people coming over the border. I think he does make some good points, but he doesn’t kinda put it in a way that a usual politician would put it. So, it does throw off everybody. But if you listen to what he says, even ‘The Funk’ thinks he’s keeping it real.

“But I think Trump is the greatest heel ever. It’s because he’s speaking the truth. He’s speaking the truth. Politicians these days, there’s just so much corruption, man. We see that with MMA in New York. It’s straight corruption, I’m not kidding. It’s, ‘Hey, can you do a favor for me, because this guy did a favor for me, and we’re friends. So, just do the right thing.’ It’s just not right.”

Interesting opinion from the champion, who believes the corruption of politics has evaded Trump because as an infamous billionaire, he pays for and supports his own campaign rather than relying on donations from wealthy followers.

It sounds like “The Donald” has the support of the UFC middleweight champion. Will that propel him to a victory next year?