LowKickMMA.com
Home UFC News Chris Weidman “Hoping” To Return By The End Of The Year After... 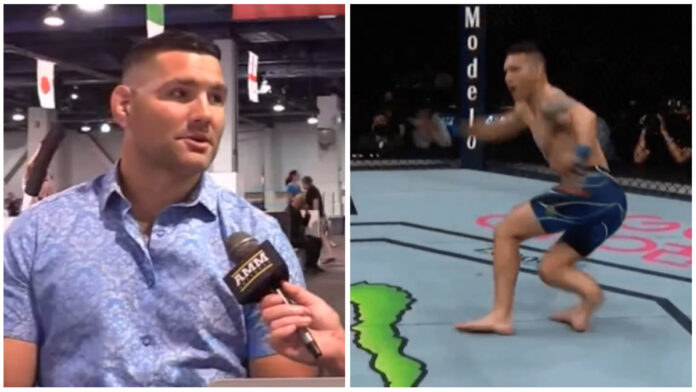 Chris Weidman is looking to make his return to fighting this year.

Former UFC middleweight champion Chris Weidman has remained out of action since his last outing against Uriah Hall at UFC 261. Weidman snapped his shin just 17 seconds into the opening round. The horrific leg injury kept him on the sidelines for over a year following the incident in April 2021.

Now, a return seems closer than ever.

Chris Weidman is “hoping” to return this year

In an interview with MMA Fighting’s Mike Heck, Chris Weidman talked about how the last 15 months were for him in recovery. He expanded on the ESPN documentary that will come out later to show what he went through to make his comeback.

“Pretty damn sucky, it’s been very hard,” Weidman said. “Lots of ups and downs, a lot of issues and it just sucks I can’t put too much out there because I’m doing a documentary with ESPN, they’re doing an E60.

“They’re going to market it as the worst injury of all time and coming back from that because once you guys all find out what I’ve had to go through over these last 15 months, it’s been a lot. I’m excited for them to be able to tell that story finally, and I’m excited to come back and shock the world.

“The All-American” revealed that he will corner Anthony Smith in his upcoming bout with Magomed Ankalaev at UFC 277 on July 30 at American Airlines Center in Dallas, Texas.

“July 30th, I’m actually cornering Anthony Smith. I don’t think I told anybody that yet. He’s been coming down to South Carolina to train with me and help him get ready. He’s got that title eliminator fight with Ankalaev so I’m excited to try to get him ready for that.”