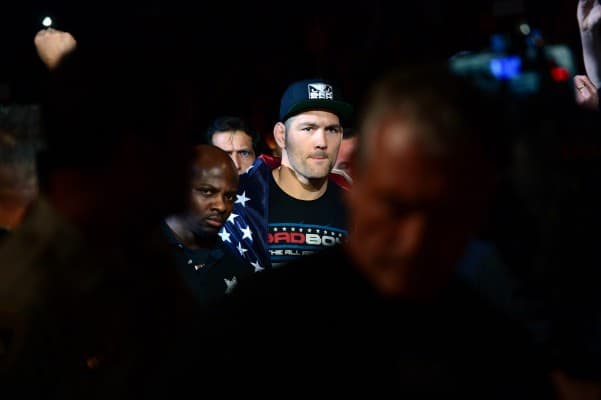 UFC middleweight champion Chris Weidman may have done all he could to silence his doubters with an impressive first round TKO of Vitor Belfort in the co-main event of last Saturday’s (May 23, 2015) UFC 187, but he knows that the haters will carry on all the same.

After the fight, Weidman spoke up to those who still question the legitimacy of his growing reign, urging them to ‘join his team’ now because it’s their last chance. A large number of previous doubters may have jumped to Weidman’s side after the brutalizing victory where he survived an early storm from ‘The Phenom,’ yet there are still those who hate on him consistently.

Because of that Weidman spoke up on today’s episode of The MMA Hour to give his take that people still haven’t been become overnight fans as he advised:

“It’s too early to make that statement. Give it a month or two.”

Weidman apparently planned to thank his coaches and family after the win, but the now famous ‘join the team’ slogan was created out of thin air:

Helwani then questioned Weidman about his appearance during his walkout, where he seemed pale and tired. Most attributed it to his draining weight cut from the day before, but Weidman gave an honest explanation of the real reason he didn’t look quite himself during the walkout:

“I’ll be honest with you. It was my first time ever I had to go to the bathroom bad. And I’m like, ‘I cannot believe I’m gonna crap myself in the middle of this cage.’ Like, as soon as Vitor’s walkout music came on, I was contemplating, all I was thinking about was like, ‘I don’t know if I should run to the bathroom now,’ or should I hold it; I don’t know what’s going to happen. That’s really what was going through my mind the whole item when I’m walking out; I’m like, ‘I might be the first person to have to run away from the fight to go the bathroom, can they hold the fight for me?’”

He didn’t want to admit the embarrassing set of circumstances to his team, so he gave his trademark American flag to coach Ray Longo and gutted it out until the fight was over:

“But I didn’t wanna like, tell anybody, because if you say it out loud it sounds worse, so when we were getting ready to do the walkout, I gave Ray my flag, I usually hold the flag, I gave Ray the flag to hold because I was just trying to focus on not crapping myself pretty much. So you were right, there was definitely something not normal going on.”

We now know why Weidman looked less than optimal on his way out to the cage, but despite some early trouble from his heated rival, Weidman persevered to retain his belt in dominant fashion.

The fact that he had to use the facilities in a bad way may or may not lend even more credibility to his performance at UFC 187, but one thing is probably for certain: Weidman is going to have to clean out his division to finally get the respect he deserves.

Just as long as he’s ready to do the same with his underwear.