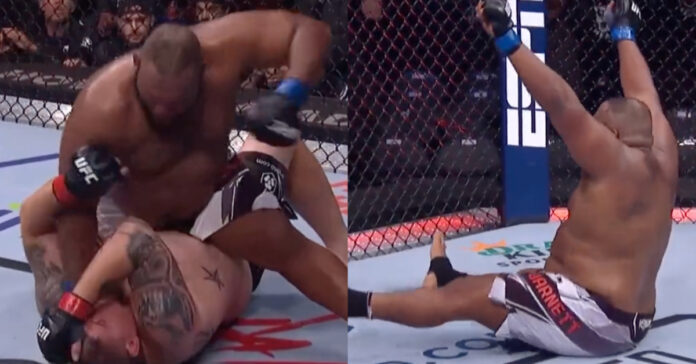 Jake Collier entered this heavyweight class as a -500 favorite, with very few giving ‘Beast Boy’ a chance in winning. The first round went as expected, with Collier blitzing Barnett, stunning him early. A deep cut was opened above his eye, significantly obscuring his vision. However, Barnett weathered the storm, and towards the end of the first, Collier began to slow down.

Referee Mark Smith had the doctor step in as the round came to an end, ensuring that Barnett was still fit to fight. The doctor gave the go-ahead, and ‘Beast Boy’ came out in the second with a vengeance. The 36-year-old was able to get top control, and began landing hellacious ground & pound at the clip of someone in a much lower weight class.

The strikes continued to the point where Mark Smith was forced to step in. Chris Barnett celebrated in typical ‘Beast Boy’ style.

Check out all the highlights from Chris Barnett’s TKO win over Jake Collier below: