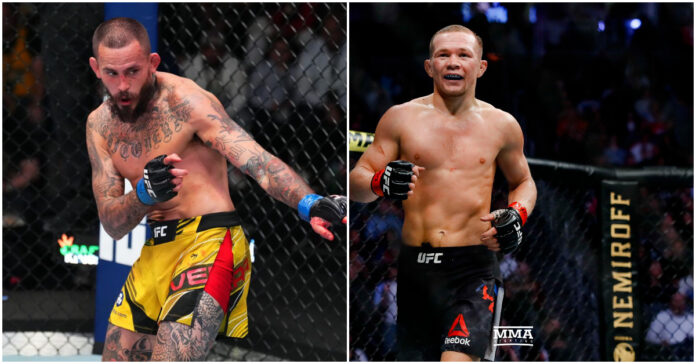 UFC bantamweight Marlon Chito Vera called for a fight against Petr Yan in his next fight.

Coming off an impressive win over Rob Font in his latest outing, Chito Vera pushed himself up the rankings to land on the fifth contender spot for the 135-lbs division. Having made his way into the UFC in 2014, Vera got to headline a show for the first time at UFC on ESPN 35. In his debut five-round bout, Vera scored three knockdowns against Font who landed a superior amount of significant strikes.

Following his win, Chito Vera made his intentions of fighting for the title clear as he looked to work his way up the rankings. After the highly anticipated rematch between Aljamain Sterling and Petr Yan went against the Russian, Yan found himself as the top contender instead of the champion.

In an interview with The Schmo, Marlon Chito Vera talked about his ambitions for the bantamweight gold and called for a fight against Petr Yan next.

“We’re right there,” Vera said. “We’re literally one win away from fight for that belt so I hope we get it done with Yan. I think that’s the path to the belt. Number 1 contender, we kick his ass, and we move forward.”

Chito Vera is willing to fight Sean O’Malley for a second time if the UFC decides to make it happen as ‘Suga’ works his way up the food chain.

“If they want to make it happen, I kick his ass again, put him out the same way. He going to keep talking, I keep winning.”

Vera also speculated the reasoning behind Henry Cejudo‘s abrupt retirement and his many calls for return since.

Ultimately, Chito Vera has his eyes set on the title and is confident he’ll overcome any obstacles in his way to get there.

“I’m fighting number one contender next, I’m kicking his ass, and whoever has the belt, I’m taking it from them.”