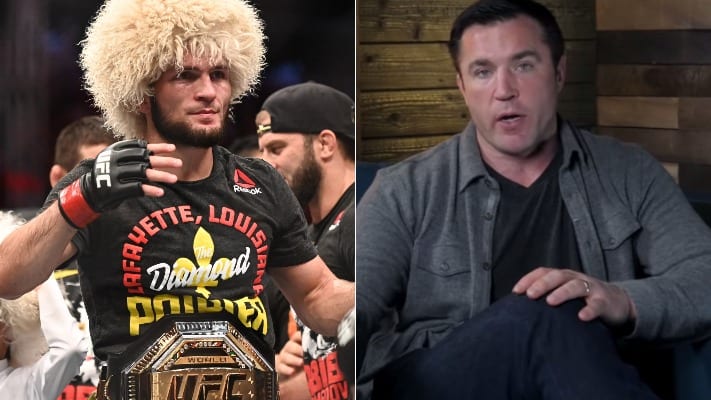 There seems to be some rumors going around that UFC lightweight champion Khabib Nurmagomedov might have failed a United States Anti-Doping Agency (USADA) drug test.

“Rumors of Khabib failing a drug test, I got to tell you guys, I don’t see any truth to this,” Sonnen said. “In fact, I want to just come out and tell you guys, this is not true, and this is a nasty and vicious thing to say about a guy whose clean for no reason. I can’t go quite that far, because how many times in this sport – whenever there’s smoke in this sport, whenever there’s smoke, there’s fire. Right? I mean, the worst guys to keep a secret are fighters.”

Sonnen praised USADA for their new initiative to keep possible anti-doping violations under wraps from the public until it’s confirmed it was, in fact, intentional, or simply a case of a tainted supplement – which tends to be the case more often than not. However, Sonnen points out this new process comes with consequences, such as Khabib now being subject to rumors.

But Sonnen notes that, given Nurmagomedov was matched up with Tony Ferguson for a title fight in Brooklyn, he doesn’t see any possibility that Khabib is on the hot seat.

“Like anything no good deed goes unpunished,” Sonnen said. “That was a good deed by USADA. Now, what’s the punishment. Well, now the unintended consequence is that you can now accuse a guy. You can now start a rumor that isn’t true about Khabib. And there’s nothing that Khabib can do, because the process says that it has to stay quiet until it is all resolved and done. That then fuels the fire to a vicious rumor about Khabib, because there’s nobody to come out and speak.

“See how this accidentally happened and this is why you can start a rumor like that? Khabib – the way USADA works is, he can go to them and say ‘Hey, would you guys mind putting out a statement?’ Their PR team would likely be very helpful and say ‘Yeah we could do that.’ Or not, and Khabib is dealing with something behind the scenes and he’s having to turn in this or – there’s all sorts of moving parts. None of which I believe are true, none of which there’s any evidence that it’s true.

“In fact we have evidence to the contrary. If USADA is ever looking into something a guy is quietly removed from a card. If he chooses to come out and speak about it, like Nate Diaz did, and say ‘You better get this resolved.’……. You have that choice. But we have evidence that Khabib is not in the hot seat, in that, he just got assigned to a fight.

“That is the opposite reaction that the UFC and USADA would have to somebody that was flagged. So I’m very confident in telling you guys this is a garbage, vicious, fake news like to the highest of levels. I’m very confident in telling you that, based on the evidence that Khabib now has a date at the Barclays Center in April with Tony [Ferguson].”

What do you make of Sonnen’s reaction to rumors that Khabib may have failed a drug test?