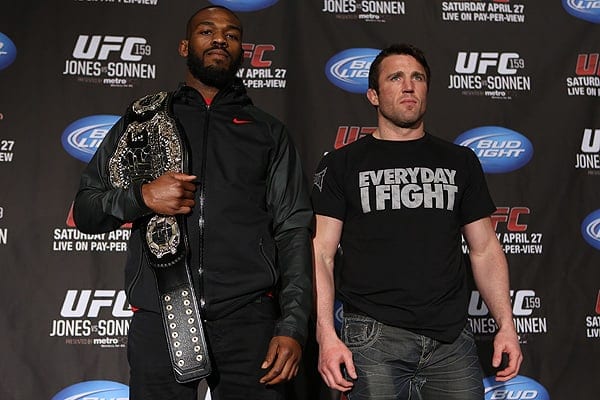 After Jon Jones called out him as the ‘worst trash talker,’ it’s high time Chael Sonnen flames the disgraced UFC champion in response.

MMA great “Bones” has been on the sidelines for the past year awaiting his punishment from USADA for another positive test for steroids. He’s largely been out of the limelight but did emerge recently to blast Sonnen’s style of pre-fight banter:

“I think Chael Sonnen is the worst trash talker. Just because a lot of the stuff he says is gibberish. Conor McGregor. When he talks trash there’s a lot of truth behind what he’s saying. I think Khabib will be under more pressure. Just because, he has a very dangerous fighter who usually backs up what he says. Where Chael Sonnen is known to talk trash and lose.”

Sonnen obviously caught wind of Jones’ words and fired back with authority. “The American Gangster” hopped on his Twitter to berate his former opponent with a bevy of sarcasm, and the results were undeniably hilarious.

Sonnen opened with a stark insult wondering if Jones was even in the fight game any longer:

JonJon
Heard your critique
Forgot you were in the business; even as s spectator

You trash-talk about as well as you exchange insurance info after traffic accidents….

Sonnen also compared his questionable PED use record to Jones. He believes he’s a saint compared to “Bones'” sordid history of drug use:

I treasure you
As long as you're around, I look like a clean overachiever

Sonnen even called Jones’ career one big side effect because of his drug use:

One
Big
SIDE EFFECT

With Jones on the shelf for yet another extended period, Sonnen took a jab at that unfortunate dynamic.

You spend more time on the shelf than a
LIBRARY
BOOK,
ya
BUM

The former UFC title contender also warned “Bones” to watch out for USADA, even though they haven’t really been on his case lately:

Turn your cel-phone off; USADA has GPS TRACKING

Cocaine’s A Hell Of A Drug

But Sonnen wasn’t only focused on Jones’ PED use. He slammed the former champ’s well-documented issues with cocaine as well:

“Uncle Chael” continued along those “lines” with a seething jab involving Jones’ brothers:

Finally, Sonnen closed with a critique of Jones’ style both in and out of the Octagon:

Sonnen will meet legendary heavyweight Fedor Emelianenko in the main event of Bellator 208 as part of their ongoing Heavyweight Grand Prix. As for Jones, it’s anyone’s guess as to when – or even if – he’ll ever return to the cage.

Just don’t be surprised if he does.