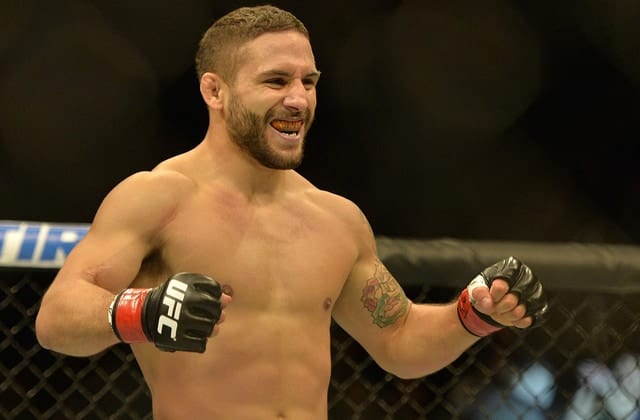 Two-time UFC featherweight title contender Chad Mendes is stepping up to the UFC 189 main event, in what has proved to be a bit of a circus for the promotion in the last month. Ever since Jose Aldo’s highly sketchy run in with the NSAC (Nevada State Athletic Commission), fans have been questioning whether the featherweight boss might be starting to crack. The fact that Aldo has pulled out of his fifth, and arguably biggest title fight ever is bad enough, but there’s a lot more at stake here than some PPV (pay-per-view) sales and a dream fight that we all really want to see.

Think back to when Mendes’ UFC 189 opponent Conor McGregor debuted in the UFC, and to who the promotion had in their marketable ranks; Anderson Silva was still the middleweight champion and topped the P4P (pound-for-pound) list with an iron rule, Geroges St-Pierre was the posterboy and most dominant welterweight fighter to ever live, and was still beating the best convincingly. Cain Velasquez was the new best-ever heavyweight champion, having recently smashed Antonio Silva and Brock Lesnar, and the UFC were having a wonderful time with how many healthy beasts there were in every weight class.

Failed drug tests, shock losses, pseudo-retirements and an injury plague has seen all of the above and more, removed from the limelight and out of the profit margin for the UFC. In steps an Irishman with an attitude, and some serious chops in the stand up, and the Zuffa gang throw every cent in to him. Let’s not read too deep in to the next paragraph now, as I want to first make it clear that I’m a fan of McGregor, but we have to all face facts….

The UFC wanted McGregor as their next poster boy for two reasons; circumstance and his talent, and they had finally got their way to recoup what was turning out to be a duff 2014 for the world’s biggest MMA organization. 2013 had served as the best year ever for the promotion, and they rounded it off by introducing their online digital network, Fight Pass, although it was not exactly welcomed at first. With Dana White and the Fertitta posse gearing up for yet another record year, the injury plague axed many a champion. Anthony Pettis did little more than to stall the lightweight division’s availability, as did the Mexican 265-pound (temp) boss Velasquez.

Stars were running short for the UFC, formerly unmarketable names were suddenly being thrown in to short notice title headliners, cards were built around pointless bouts and the rankings have basically gone unused in the last 18 months. Throughout this turmoil there has been one constant though; Conor McGregor’s ability to both win fights, and sell the living shit out of them too. So an unspoken (at least publicly) partnership was formed, between a young Irish hopeful and his equally ambitious employers.

Let’s not say that McGregor was fed cans, because it’s simply not true, but he was also not fed the best of the division, and let’s be clear that at one point or another, they were pretty much all available to fight ‘The Notorious’ during his promotional hazing. Alas McGregor’s pinacle bout of his five-fight streak was against steroid-test failing and a pretty much tailor-made Dennis Siver. Again, to be clear, McGregor’s wins over Dustin Poirier and Max Holloway were as legit as they come, but many argued that he should of been fighting ‘Money’ or Frankie Edgar first anyway, so why the headline of this article?

Well, in an interesting twist of fate, the UFC actually stands to lose money on an event featuring Conor McGregor. The previously record breaking Irish sensation will likely still do huge buys for his bout with Mendes, but the fact remains that there is a difference in profit between the Brazilian legend Jose Aldo, and the guy that he already beat twice. Expect some seriously crammed hype for McGregor vs. Mendes in the next few days. And finally to the point, ‘Money’ could not only pave his way to a third title fight with ‘Scarface’, he could also rain on the UFC’s bonfire in the form of Conor McGregor checks.

A ‘Money’ win could spell trouble for the UFC, especially after they have spent such insane amounts of dosh promoting Aldo vs. McGregor at UFC 189. It might be a dream come true for the UFC on July 11th, or a nightmare of epic proportions.