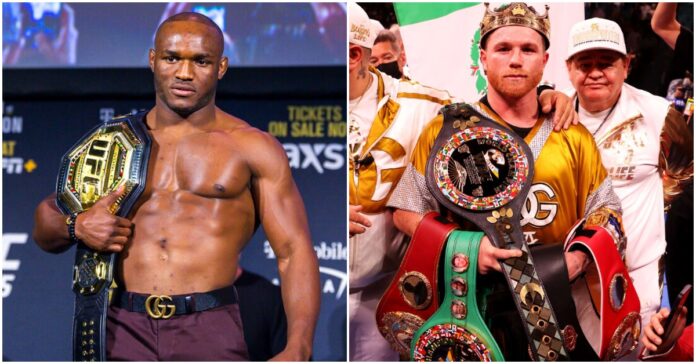 This isn’t the first time a championship-caliber MMA fighter wanted to test their skills in the boxing ring against one of boxing’s greatest. In 2017, then UFC Champion, Connor McGregor challenged Floyd ‘Money’ Mayweather, in what turned into the second-highest selling Pay-Per-View in combat sports history.

‘The Nigerian Nightmare’ has been adamant in his campaign for a boxing match against Alvarez in recent months, although Dana White and the UFC have not taken steps to join him in the promotion of a super fight. He has constantly called out the superstar boxer in interviews, press conferences, and through social media.

Could Kamaru Usman vs. Canelo Alvarez Be the Fight to Make?

Kamaru Usman, who is currently healing from hand ligament surgery at the moment, is set to face off against Leon Edwards in July, while Alvarez will challenge Dmitry Bivol for his Light Heavyweight title on May 7.

Canelo Alvarez sat down with TMZ to speak on his ideas about the possible matchup with Usman.

“Never say no, but right now it’s not in my future. Not right now. Yeah, it’s all about legacy right now, but you never know.” (Via MMAJunkie).

Never have we seen the two very best in their respective sports face off against one another for ultimate glory and bragging rights in their athletic primes.  Although it doesn’t seem likely at the moment, there is no denying a matchup of this caliber would send shockwaves throughout combat sports.

Do you want to see Kamaru Usman vs. Canelo Alvarez? Who do you think would win?