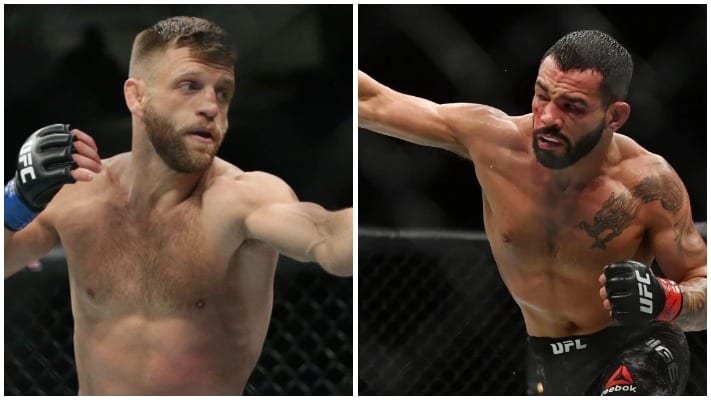 Featherweight contenders Calvin Kattar and Dan Ige will headline the second of four events set to be held on Yas Island, Abu Dhabi on July 15. Brett Okamoto of ESPN took to social media late last night to confirm the two 145lb fighters are set to duke it out over five rounds next month, he wrote.

“Breaking: Calvin Kattar ( @CalvinKattar ) vs. Dan Ige ( @Dynamitedan808 ) will headline UFC Fight Night on July 15 at Fight Island in Abu Dhabi, per sources. Kattar coming off that highlight KO over Jeremy Stephens on May 9. Ige off a split decision over Edson Barboza.”

As Okamoto states Kattar is coming off perhaps the biggest win of his career. The 32-year-old picked up a highlight-reel knockout win against long-time contender Jeremy Stephens at UFC 249 on May 9. Prior to that he lost to Zabit Magomedsharipov but came out with immense credit for giving the Russian phenom his toughest test to date.

Ige is currently riding a six-fight win streak in the featherweight division. In his last fight he edged out former lightweight contender Edson Barboza who was making his divisional debut. The win although controversial was the biggest of his career and has earned him a headline slot and a shot at one of the best at 145lbs.

Is Calvin Kattar vs. Dan Ige worthy of its main event slot on July 15?